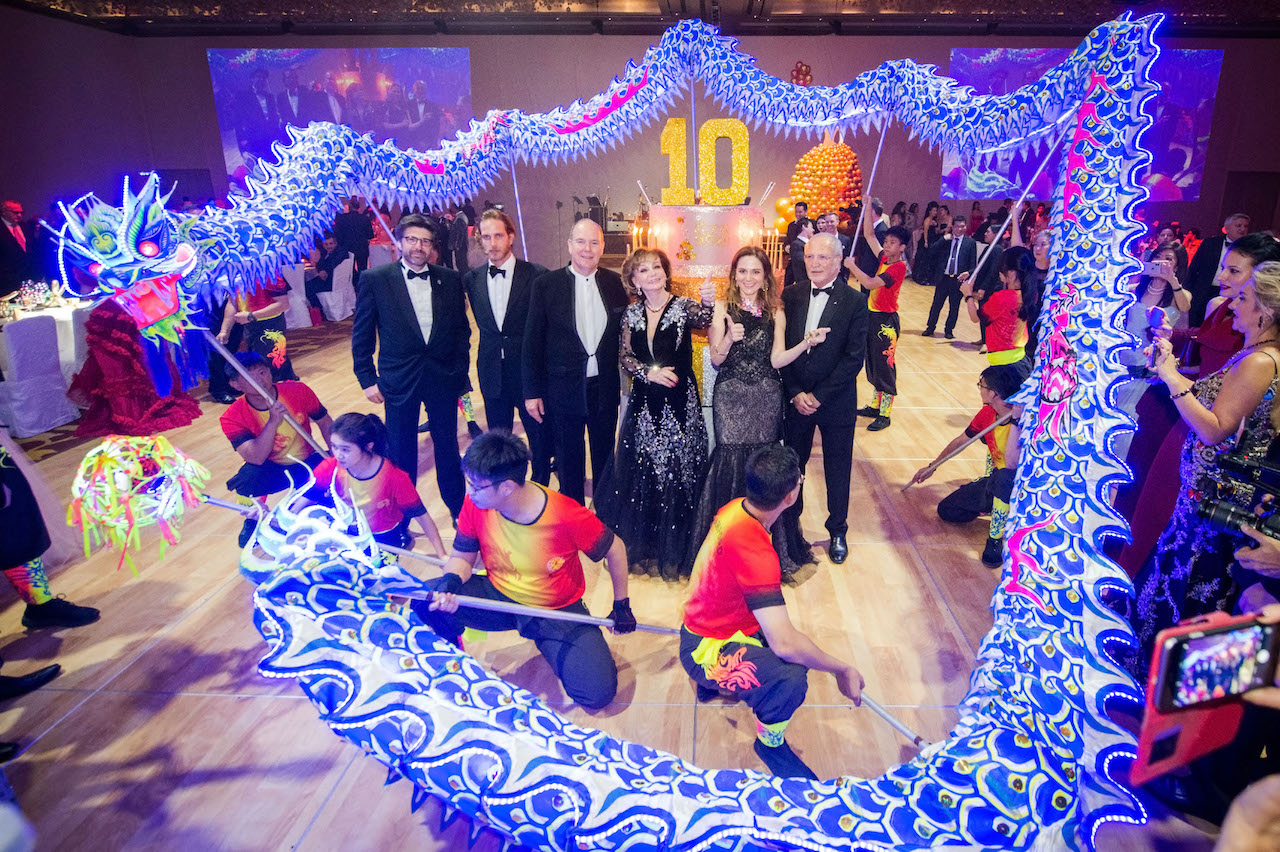 The Prince Albert II of Monaco Foundation celebrated the 10th anniversary of the Ball in Monaco, a gala reception held at the prestigious Marina Bay Sands in Singapore on 9 November in the presence of HSH the Sovereign Prince, Zulkifli Masagos, Singapore’s Minister of the Environment, and a host of key figures. It provided the opportunity to look back over the Foundation’s 10-year presence in Asia – 10 years of continual hard work by Jacqueline Deromedi, President of the Singapore branch of the Prince Albert II of Monaco Foundation, and her team, to raise widespread awareness of the environmental values championed by â€‹â€‹the Foundation.

The Prince Albert II of Monaco Foundation Asia, chaired by Jacqueline Deromedi, is supported by a voluntary Board of Directors composed of well-known scientists and key figures who share a passion for protecting the environment. Over the past 10 years, the Singapore branch has taken action to promote the protection of the planet and raise funds to support the concrete, on-the-ground initiatives run by the Foundation in Asia. More than 20 projects improving access to water, tackling climate change and protecting biodiversity have benefitted from the Foundation’s support over several years. Seven projects are under way to improve the living conditions of local communities: by supporting agricultural development in Bangladesh, promoting the use of renewable energy in Myanmar, protecting emblematic endangered species like the Amur tiger in Vietnam and China, and combatting deforestation through sustainable forest management in places like Myanmar and Indonesia.

The prestigious Ball in Monaco also supported the protection of sharks

Six hundred guests from all over Asia gathered with HSH Prince Albert II of Monaco at the iconic Marina Bay Sands Singapore hotel for a grand gala dinner held to celebrate its 10th anniversary.

HSH the Sovereign Prince issued a call to action, highlighting the values â€‹â€‹of solidarity and responsibility: “A new kind of solidarity, which goes beyond the meanings traditionally associated with the word.

It is solidarity with our contemporaries, of course, with those who have already fallen victim to climate change and the natural disasters that come with it. Those who suffer from the pollution that is contaminating the food chain and ransacking the countryside. The pollution that is poisoning the air we breathe - World health organization informed us last week that 600,000 children worldwide die from this each year, and that more than 650 million children have been condemned to breathe toxic air, 100% of the children of the region of Asia.”

Jean-Marc Deromedi, Honorary Consul of Monaco in Singapore, said during his speech: “We still have to understand why we are all here together. Every year we witness an increasing number of worrying, sometimes catastrophic, weather events. Saint-Exupery wrote: ‘Your task is not to foresee the future, but to enable it.’ You are lighting the way for us, Your Serene Highness. We are all here to make a contribution to tomorrow’s future.”

The Singapore Minister of the Environment, Zulkifli Masagos, highlighted the values shared by his country and Monaco, as promoted by the Foundation, concerning the protection of the environment and endangered species: “Our partnership is vital for sustainable development because the scale and complexity of environmental problems require the involvement of every society. I congratulate the Foundation for its achievements, His Serene Highness for the vision of his Foundation and Jacky Deromedi for her leadership of the Singapore office.”

The protection of endangered species was one of the event’s key themes. Funds raised during the gala evening will be used to support a shark conservation project in China and Thailand that was approved by the Prince Albert II of Monaco Foundation’s Board of Directors on 30 November. ‘Addressing the Shark Crisis: Reducing Demand for Shark Fin in Asian Markets’ delivers a concrete response to the pressure faced by sharks whose fins are unfortunately still very popular with Asian consumers. The aim of this project is to help extend WWF’s regional shark fin programme to mainland China and to Thailand to bring about a change in attitude towards fin consumption. A study will also be conducted among targeted consumer groups, e-commerce platforms and tour operators to develop effective strategies for reducing demand. In Thailand the project will work with the government to tackle illegal trade and strengthen partnerships with existing NGOs. Since 2007 the programme has already mobilised 160 hotels and restaurants in Hong Kong, Singapore, Malaysia and Indonesia to ban shark fin from their menus.

The auction was an out-and-out success, raising 1 million euros for the Prince Albert II of Monaco Foundation and honouring the outstanding work of staff at the Singapore branch over the past 10 years. Air France and Perrier Jouët Champagne showed their loyalty to the event once again, alongside L’Anse du Portier, which presented the Principality’s offshore extension project.

Sophie Arnaud Deromedi, CEO of Adstoria, the Monaco-based communications agency that has been organising the gala since its inception, said: “It is important to celebrate this anniversary in Singapore even when the cause is a serious one. Celebration means we have the energy to succeed and move things forward. A huge amount of work has been achieved over the past 10 years to raise awareness among Asian audiences and mobilise a growing number of key figures to support us. We started with an event of 100 people and tonight there are 600 of us! The Ball in Monaco has become an eagerly awaited event throughout the region. The anniversary theme is a positive way of issuing a very festive call to action throughout Asia and the world.” 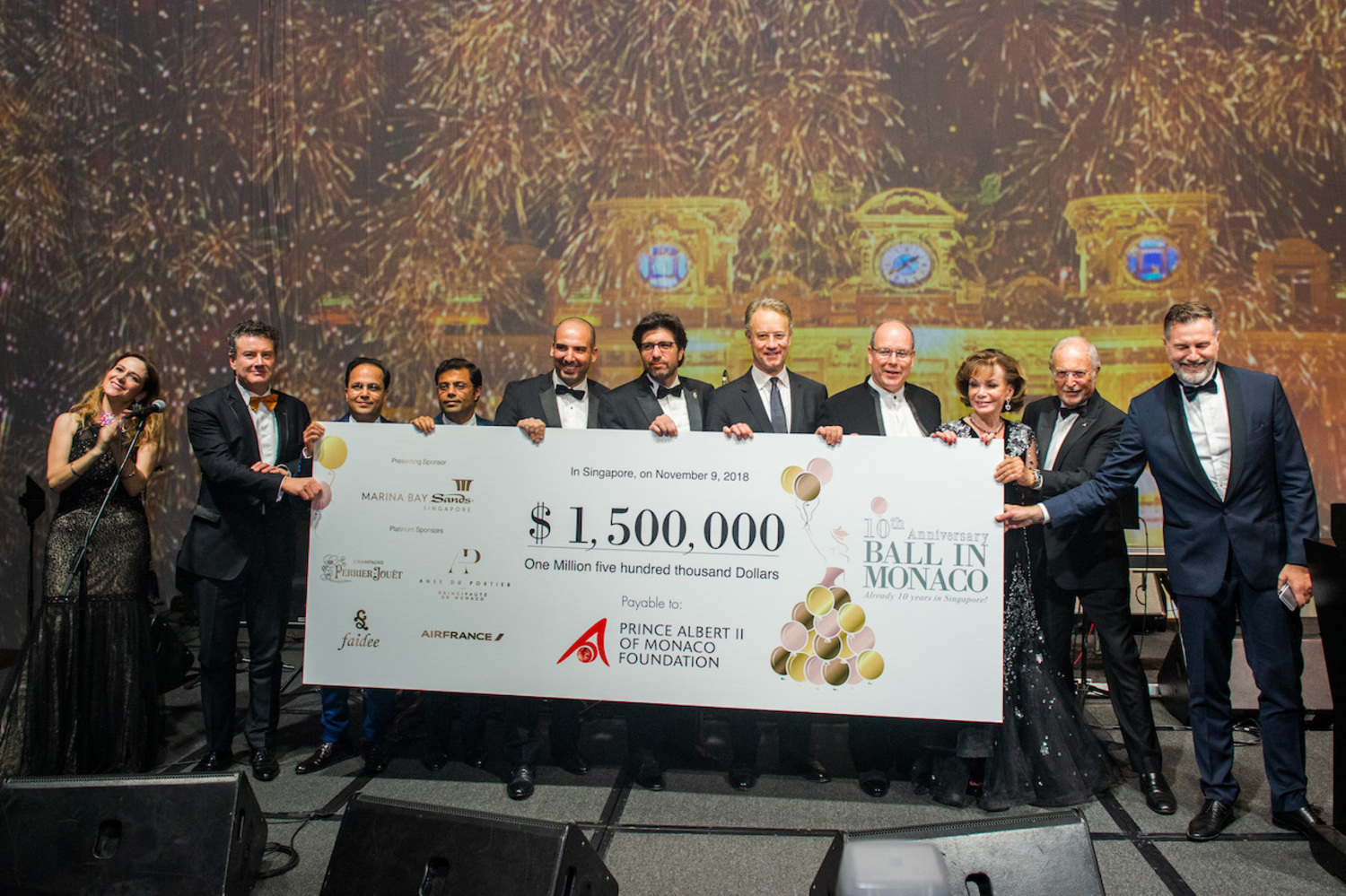