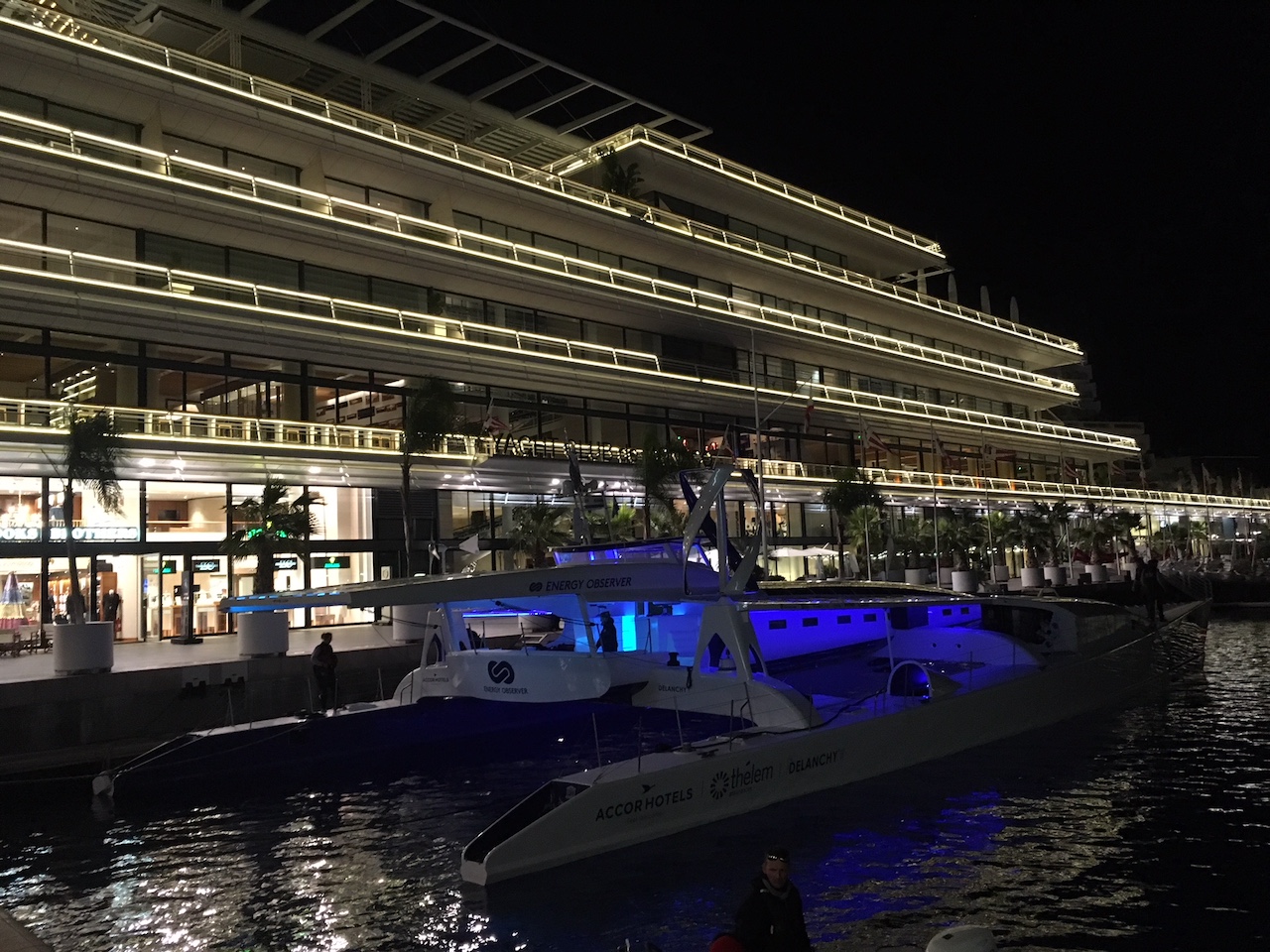 Energy Observer ends its Tour of France with a stopover in Monaco.

In all, the Energy Observer travelled over 4,000 nautical miles before completing its Tour of France in Monaco. Having arrived on Wednesday 13 December at Quai Antoine 1er, the first self-sufficient, hydrogen-powered vessel with zero greenhouse gas or fine particle emissions will welcome the public at its exhibition village until 21 December 2017.

The fact that Monaco was chosen for this stopover reflects the Prince Albert II of Monaco Foundation’s commitment to innovative projects such as Planet Solar, the Formula E championships and Solar Impulse.  For one week, the Energy Observer's team will take advantage of this last stopover to meet local stakeholders with outstanding initiatives, whilst at the same time preparing the next part of the Odyssey for the Future in the Mediterranean, and working on the first technological optimisations of the vessel.

An exhibition village devoted to the project will be made open to the public and can be visited free of charge from Thursday 14 to Thursday 21 December from 10 am to 6 pm on Quai Antoine 1er.

The Prince Albert II of Monaco Foundation and Energy Observer, an innovative encounter

The links between the Prince Albert II of Monaco Foundation, the Principality of Monaco and Energy Observer date back to the very outset of the project, through several meetings during which the Sovereign also showed a great interest in the latter and expressed his desire to welcome the boat for one stopover during its World Tour.  Today, this goal has been achieved and this support is in line with the Principality’s commitment to encourage major projects focusing on technological innovations, which help fight against climate change.

Indeed, the Foundation has been involved in the following initiatives:

-       PlanetSolar: this solar-powered catamaran circumnavigated the world between 2010 and 2012.

-       Formula E: The Formula E championships, of which the Prince Albert II of Monaco Foundation is an official partner, allow for the promotion of a top-level motorsport that is both 100% electric and eco-friendly.

-       Solar Impulse: the solar plane designed and piloted by Bertrand Piccard and André Borschberg, whose expedition control centre was based in Monaco. A meeting between Bertrand Piccard and Prince Albert is in fact planned to take place during the last leg of Energy Observer’s Tour of France.

Discovering the Odyssey for the future

For one week, from Thursday 14 to Thursday 21 December, the public is invited to visit the exhibition devoted to Energy Observer under the two domes set up on Quai Antoine 1er.  Meanwhile, the catamaran will be moored on Quai Louis II. Since Energy Observer is a floating observatory and the engineers and the crew work on board every day, it is not open to the general public.

A solar-powered electric water shuttle can be used by the public to travel between the village and the boat (2€/person).

The programme: an interactive exhibition, immersive virtual reality diving with 360º projection, a unique experience that allows visitors to discover the first hydrogen-powered boat’s Odyssey for the future around the word.

Access is totally free and the discovery area is open from 10 am to 6 pm during the entire stopover.

The work planned on the boat following the Monaco stopover will be the opportunity to make an initial assessment of Energy Observer’s technological challenge and to optimise the on-board energy chain, so as to optimise its performance during the 2018 Tour of the Mediterranean, which is due to start at the beginning of March.

What people are saying:

Bernard Fautrier, Vice-President and CEO of the Prince Albert II of Monaco Foundation: "The Foundation is very happy to welcome Energy Observer, whose journey we have been following from the very outset. We have always supported outstanding initiatives and this boat is indeed one of those. In Monaco, we are inevitably aware of the impact of maritime traffic and the need to abandon the current carbon energy system for the sake of future generations and for our planet. This project is proof that this is possible and we hope to move on quickly from the experimental stage to specific applications. For all these reasons, we are going to continue to follow you, because you bring a tremendous message of hope.”

Victorien Erussard, President and Captain of Energy Observer: “This stopover is very symbolic, because it marks the end of the first chapter of Energy Observer’s Odyssey for the future. Since June, we have got to know the boat and tested all its technological building blocks; now it’s time for the initial assessment. We have also had the opportunity to meet the public, who appeared very enthusiastic during the entire tour of France, and we are grateful to them for having come to see us in such large numbers.  The reason we chose Monaco for this milestone is because it is a country that has followed us from the very start of the adventure and which knows how to support ambitious, innovative projects like ours.”

Energy Observer is the first self-sufficient, hydrogen-powered vessel with zero greenhouse gas or fine particle emissions. This electric-powered vessel of the future operates thanks to a mix of renewable energies and the carbon-free production of hydrogen extracted from seawater. This technological and scientific challenge aims to test cutting-edge technologies in extreme conditions, heralding the energy networks of tomorrow, which can be applied on land. Energy Observer is currently embarked on an odyssey for the future, which is due to last six years (2017-2022), visiting 50 countries with 101 stopovers, in order to raise the public's awareness about the key issues of ecological transition, notably renewable energies, biodiversity, mobility and the circular economy, during its stopovers in its itinerant exhibition village, on social media and through a documentary collection. 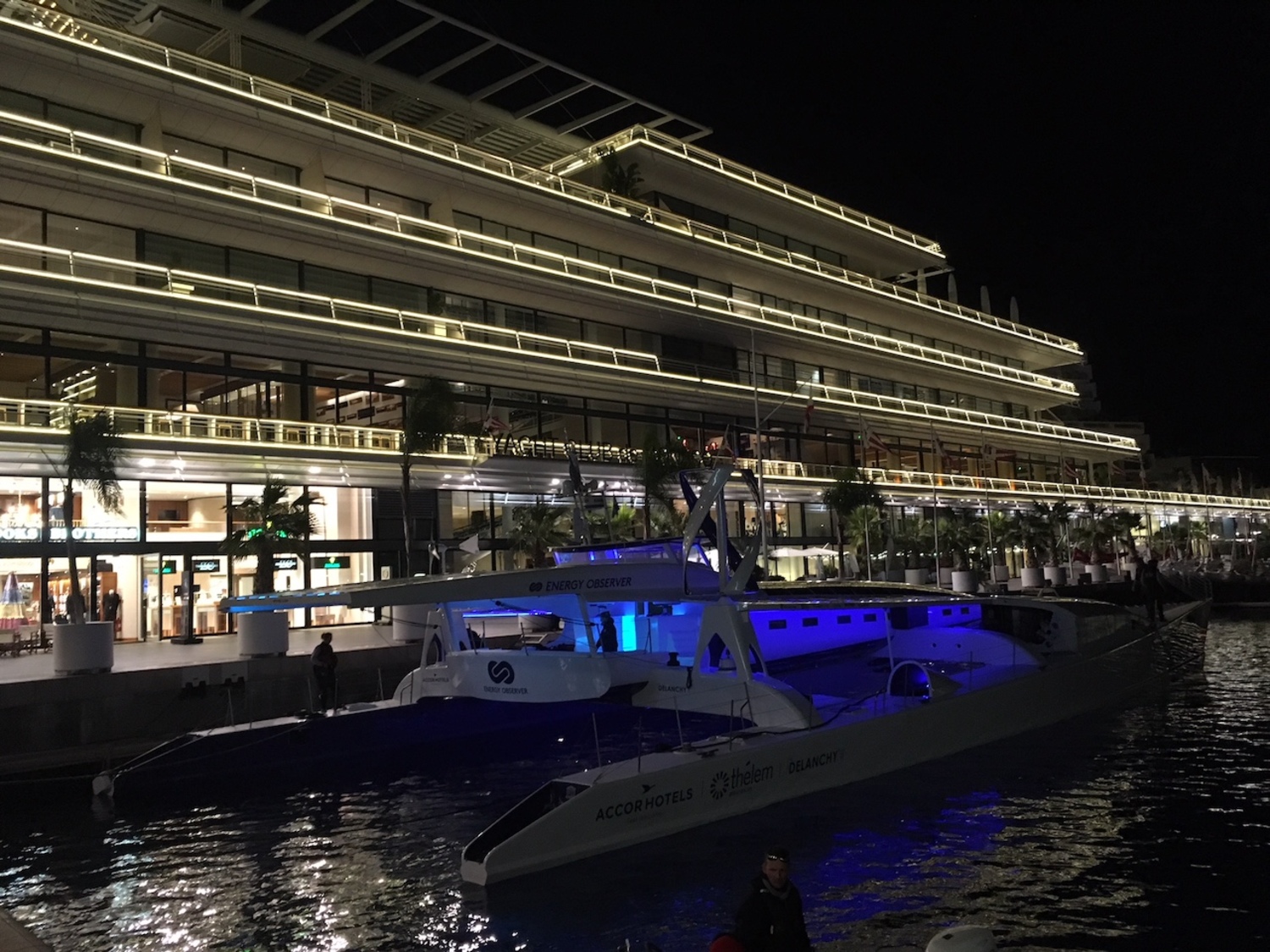 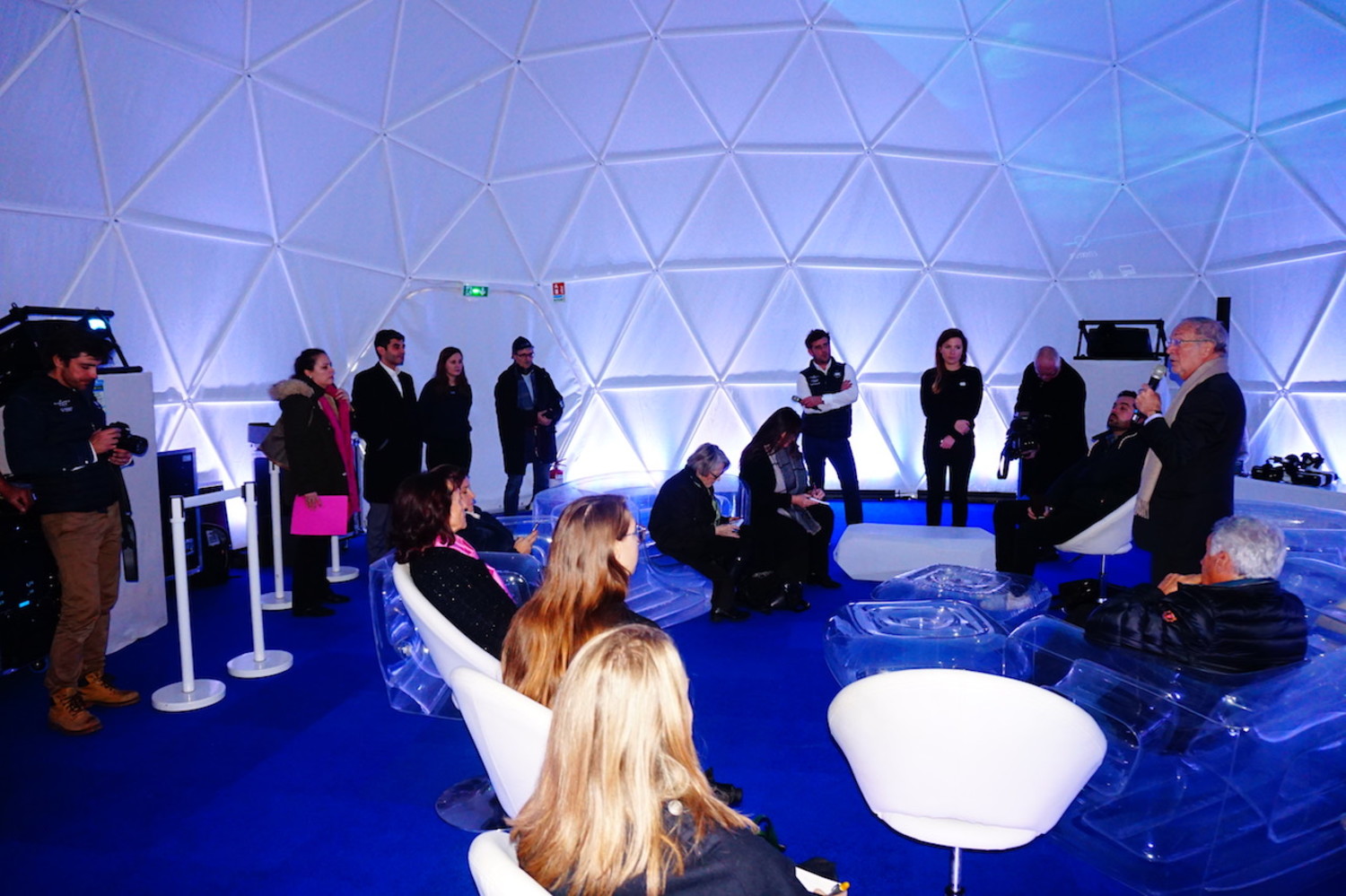