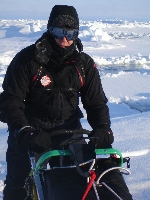 The objective of the expedition was two-fold. H.S.H. the Prince, concerned about the dangers weighing on the environment, wanted to undertake this expedition to draw the maximum public attention to the consequences of global warming, particularly in the North Pole. The Prince also wished to pay tribute to his great-great grandfather, Prince Albert I, the founder of modern-day oceanography, who undertook four expeditions to Spitzberg at the turn of the 20th century, the most significant of which took place in 1906.

At the end of the first day, the expedition had progressed twenty kilometres, the first three having been particularly tricky because of fissures and ice compression.

On the second day, the Prince and his fellow team members were only able to advance by seventeen kilometres due to limited visibility and slow progress because of ice blocks. This day was also marked by the fact that two members of the team fell into the icy water, fortunately without any serious consequences.

On Saturday, 15th April, weather conditions improved and the expedition managed to move ahead by over thirty-five kilometres. The Prince and his fellow team members set off at 9.15 in the morning local time (7.15 a.m. in the Principality) for the last leg of the trip of around twenty kilometres, which took them just over six hours and fifteen minutes.

Upon his arrival at the Pole, after planting the Monegasque flag and the International Olympic Committee flag, H.S.H. Prince Albert declared:

“Today, I am happy to have attained the goal I set myself and to have reached the North Pole with all my team, safe and sound. That is why I would like to express my warmest thanks to all of those who have made this expedition possible.

The extraordinary adventure we have just experienced must not detract us from the fact that our planet is in great danger and that we must – more than ever before – rally together to preserve it.”