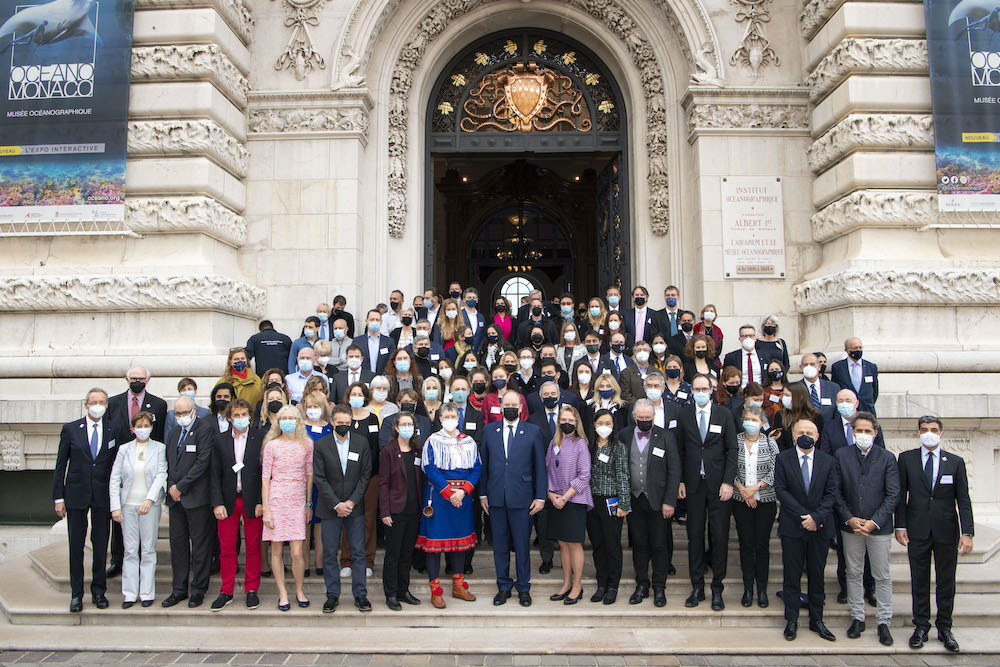 Highlights from the Scientific Symposium "The Cold is Getting Hot: From Arctic to Antarctic"

“The polar regions give us our last chance for a sustainable future; if we fail there, we will fail elsewhere.”  Jefferson Simões, SCAR

Similar quotes during the Scientific Symposium: From Arctic to Antarctic denote the significance of the frozen world for the global climate and human socioeconomic development. All people on Earth depend directly or indirectly on the Ocean and cryosphere. Environmental changes in the Arctic and the Antarctic are accelerating, affecting local species and ecosystems, and impacting the broader climate and ecological systems far beyond the polar regions.

The symposium was structured around four main themes:

The first day of the Scientific Symposium: From Arctic to Antarctic had a packed agenda. Participants conveyed the main message that urgent action is needed in the polar regions if humanity is to avoid the point of no return and irreversible damage to the planetary balance. Held under the theme “The cold is getting hot”, the Symposium started with an audio experience of the haunting effects of collapsing ice glaciers and breaking icebergs in the South Pole, by filmmaker Luc Jacquet.

Highlights of the first day included:

The keynote addresses included the messages related to:

The high-level session further included opening remarks from representatives of convening partners: Robert Calcagno, Director General, Oceanographic Institute, Prince Albert I of Monaco Foundation; Olivier Wenden, CEO and Vice President, Prince Albert II of Monaco Foundation; Larry Hinzman, President, International Arctic Science Committee (IASC); and Jefferson Cardia Simões, Vice-President, Scientific Committee on Antarctic Research (SCAR). They emphasized, among others: the importance of cross-institutional and interdisciplinary collaboration to urgently address challenges in the polar regions; the need to increase public awareness, strengthening the voice of science and appropriately communicating scientific evidence; and that “the polar regions give us the last chance for a sustainable future; if we fail there, we will fail elsewhere.”

The introductory session was concluded with a private visit of the “Polar Planet” exhibition by Filip Kulisev, at the gates of the St Martin Gardens. HSH Prince Albert II of Monaco was able to discover the 40 images on display showcasing the beauty of some of the most spectacular sites in the Arctic and Antarctic.

The first panel session under the theme “Understanding polar changes” focused on the rapid changes in the Arctic and Antarctic regions. Speakers discussed changes in: Arctic and Southern Oceans’ chemistry, temperature, and carbon pump functions; ice regimes, permafrost, and glaciers; and terrestrial and Ocean species, food webs, and ecosystems in the polar regions along with resulting social impacts.

The second panel session analyzed how changes in the polar regions are amplifying global climate changes. Panelists focused on how increased polar ice melt drives sea level rise worldwide. They also addressed altered oceanic circulation of temperature, carbon, and nutrients, due to the interconnectivity of the Arctic and Southern Oceans with other ocean basins. Both panels included a section where early career scientists shared their experiences and engaged in an interactive dialogue with panelists.

The day concluded with remarks by Olivier Poivre d’Arvor, French Ambassador for the Poles and Maritime Issues, who, highlighting the current turbulent political environment, underscored the need for international commitments and global cooperation to address polar challenges.

Symposium participants also had the opportunity to: discuss, via live video, with the Tara Ocean Foundation scientific schooner on its way back from an expedition in Antarctica; watch a short film on Venturi Antarctica, the first electric polar exploration vehicle; and watch another short film on the formidable living deep-sea ecosystem in Antarctica, by OceanX and BBC Earth. An evening reception offered participants further opportunities to exchange ideas and network.

The Scientific Symposium concluded its two-day deliberations, conveying a sense of urgency to address threats to polar regions together with an optimistic feeling that the necessary transformation, although challenging, is feasible. Participants highlighted the central role of robust scientific data and knowledge for informed decision making; underscored the need to appropriately communicate scientific messages to decision makers and the general public; and stressed that continuing with business as usual will transfer an unbearable environmental burden to future generations.

In the morning, participants attended two panel discussions on: effects of polar changes on human societies and economies; and management responses in the face of uncertainty.

In her keynote address on changes in human societies and economies, Gim Huay Neo, Director, Centre for Nature and Climate, World Economic Forum (WEF), stressed that

“by bringing the two poles together, the whole world comes together.”

She underscored the need to think as an interconnected entity, including with the work of polar scientists and the voices of communities. She focused on the WEF’s work, particularly on: raising awareness on the interconnectedness of issues; providing safe, neutral, and trusted spaces for the co-creation of solutions; and translating insights into ambition and concrete action.

Panelists addressed: the diversification of interests in polar regions over the last 20 years, making the polar environment much more complex; adaptation solutions offered by Indigenous knowledge and ways to ensure resilience and flexibility; tensions between the urgent need for energy transition and potential harmful impacts on local communities; distribution of risks and potential benefits; and tourism-related activities in the Antarctic.

Setting the stage for discussing management responses in the face of uncertainty, Jane Francis, Director, British Antarctic Survey, provided an overview of polar governance, addressing: the Arctic Council, including the international moratorium on fishing in the high seas of the Central Arctic Ocean for a minimum of 16 years to allow for scientific research; and the Antarctic Treaty System, including the Convention on the Conservation of Antarctic Marine Living Resources (CCAMLR). Francis further called for solid, robust scientific data on the impacts of tourism on the environment; highlighted the Ice Memory Foundation; and discussed the discovery of species living beneath Antarctic ice shelves, portraying how little we know about these ecosystems.

Panelists exchanged views on: management options for the Arctic region and the oceanic governance framework; work by CCAMLR to manage fisheries in a sustainable way following an ecosystem approach and efforts to protect exposed marine areas following ice shelf retreat or collapse; saving and managing ice cores from selected glaciers, which provide key insights for scientific advances; conservation challenges in the Arctic; and satellite data providing valuable information on the polar regions.

In the afternoon, Frederik Paulsen, Owner and Chairman, Ferring Pharmaceuticals, shared insights and stories from his successful environmental initiatives and travelling adventures. He underscored the importance of a proper regulative framework. He also highlighted the need to provide the necessary resources for environmental projects, noting an increasing willingness among individuals, foundations, and corporations to get involved.

Moderators from the four panel discussions summarized take home messages, stressing the urgency of addressing polar changes and moving towards a sustainable future.

Jefferson Cardia Simões, SCAR, noted “we need more than ever to listen to the social and human sciences,” coming up with the right set of questions and targets, and developing a robust communication framework.

Robert Calcagno, Oceanographic Institute, Prince Albert I of Monaco Foundation, reflected on moving forward with the Polar Initiative, focusing on next steps.

Larry Hinzman, IASC, highlighted the symposium’s success, noting “we are in the right place with the right people to move forward.” 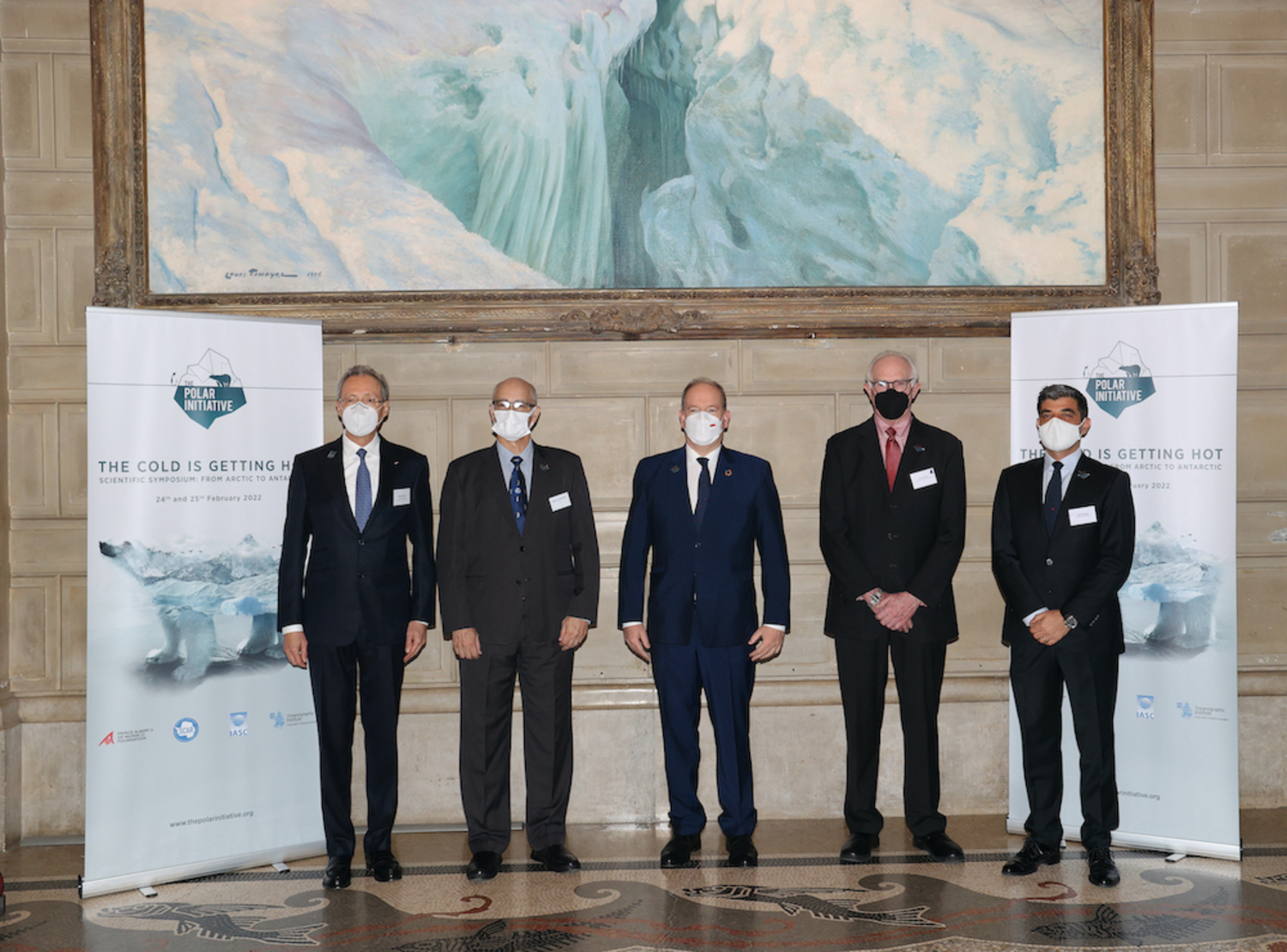 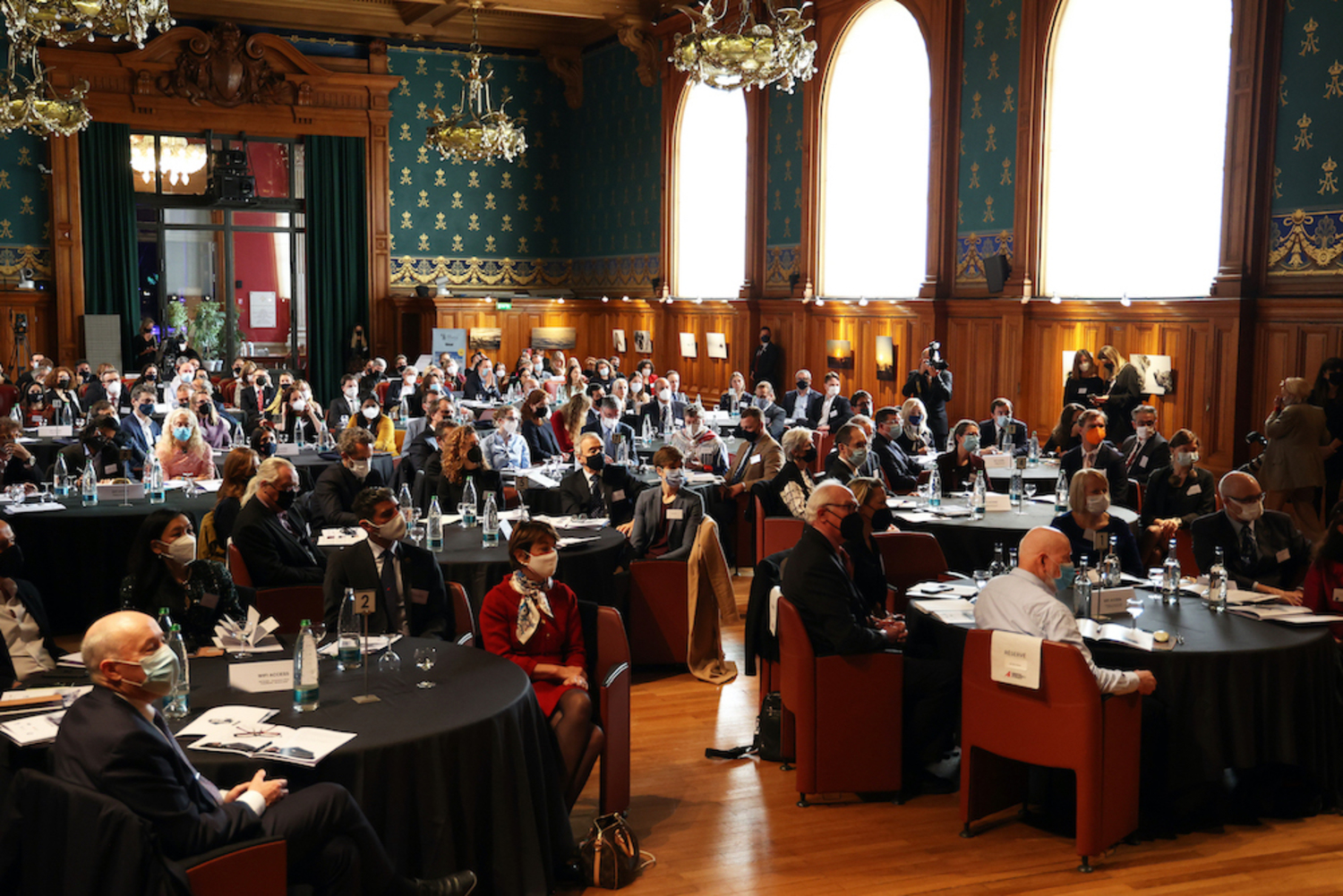 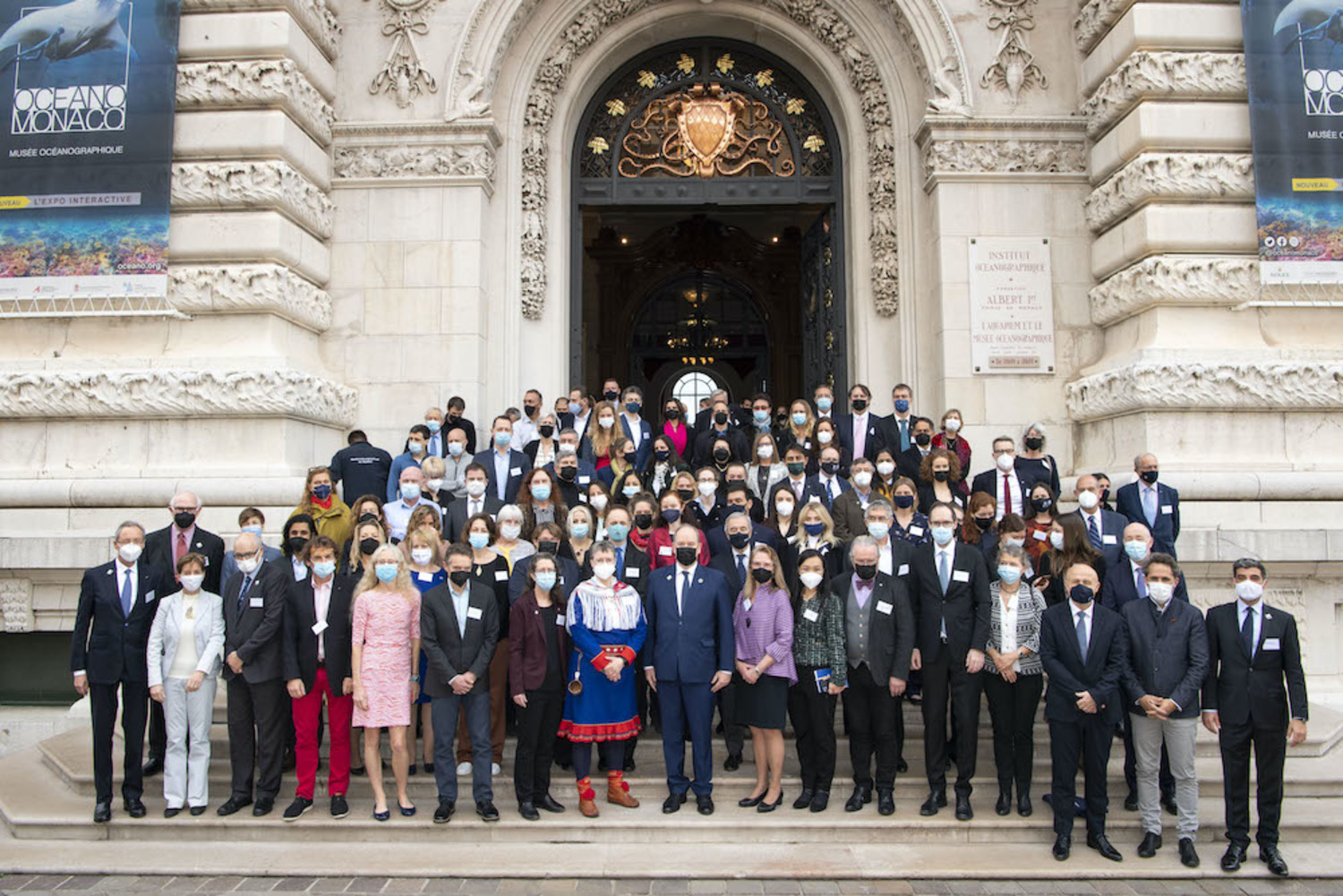 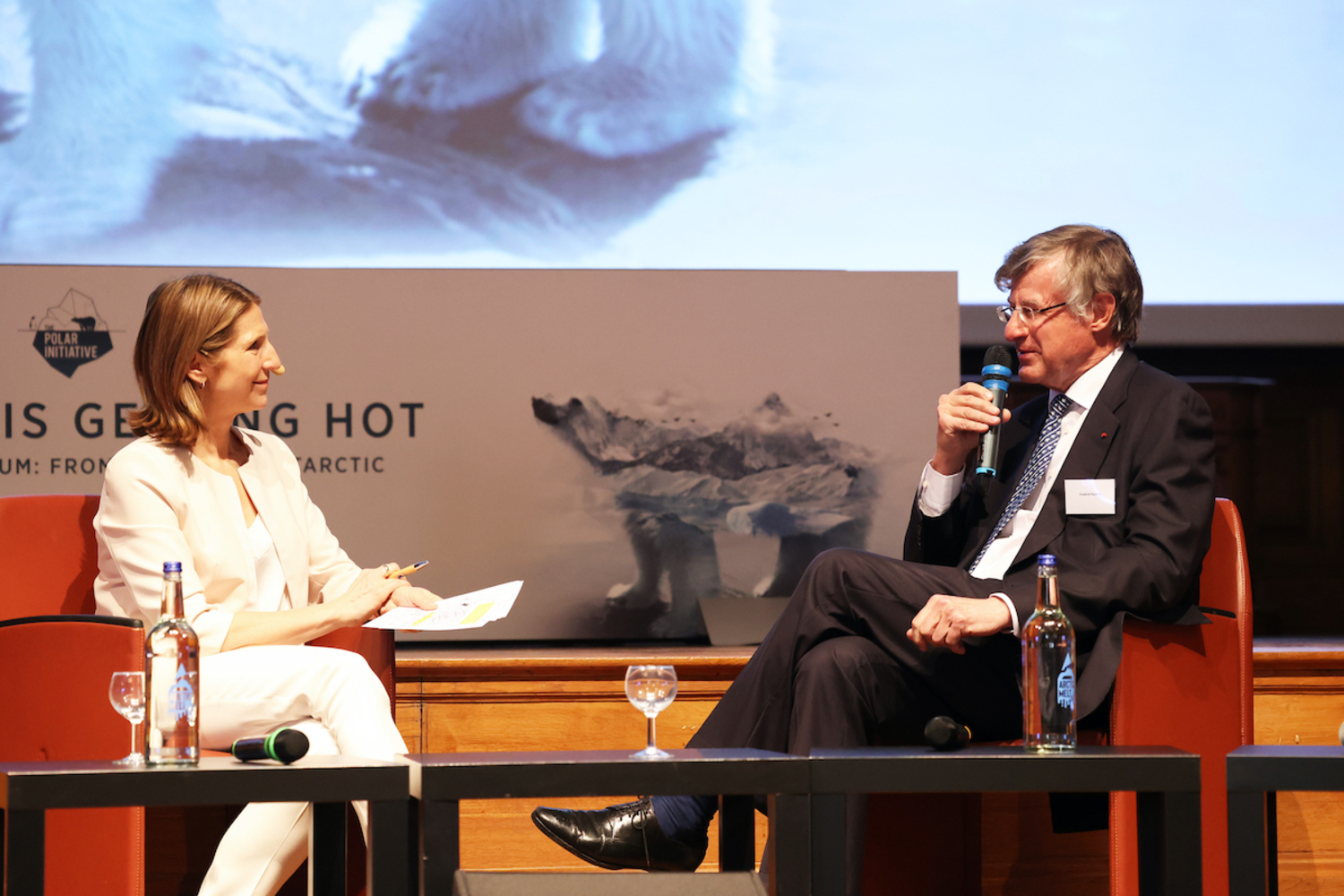 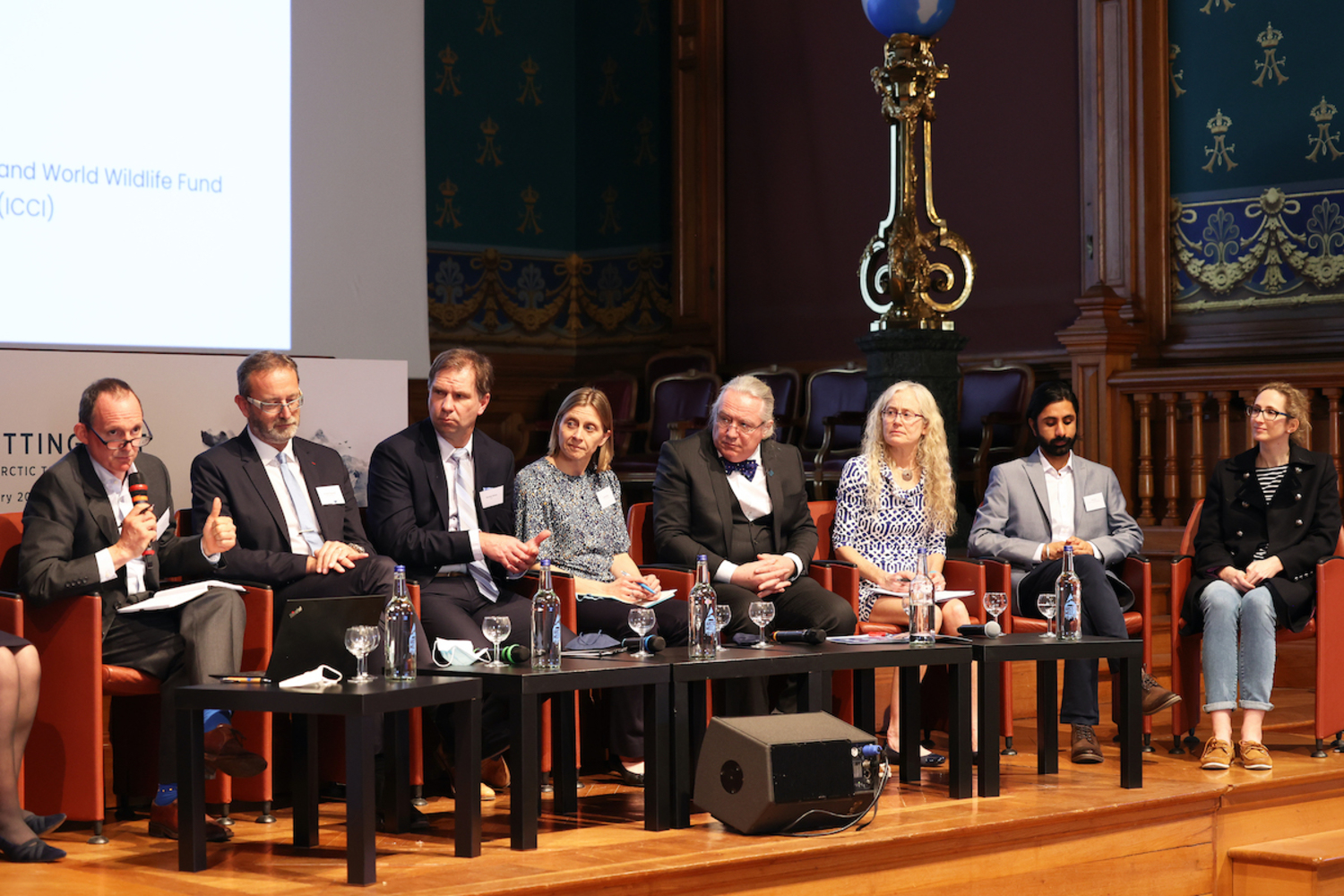 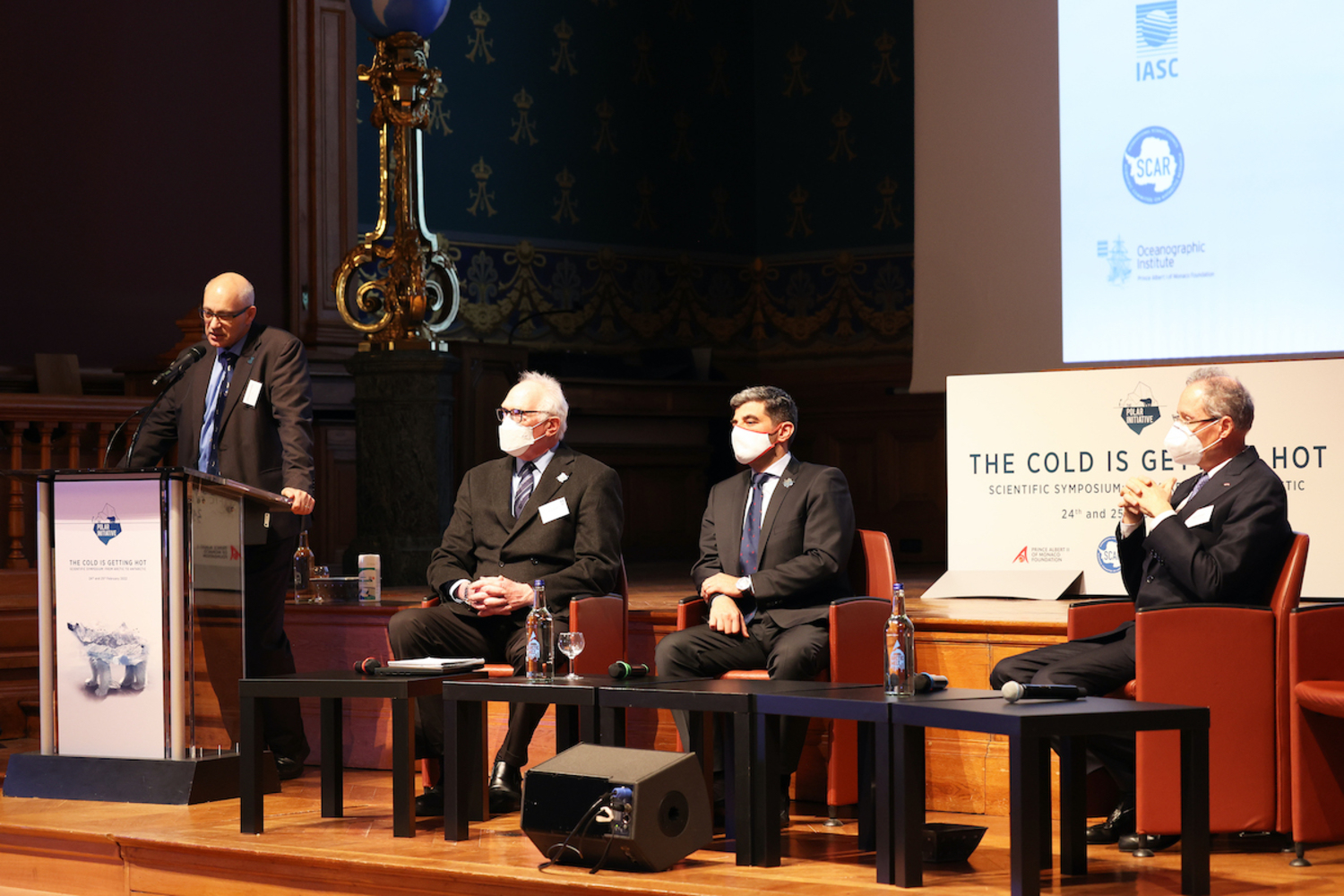 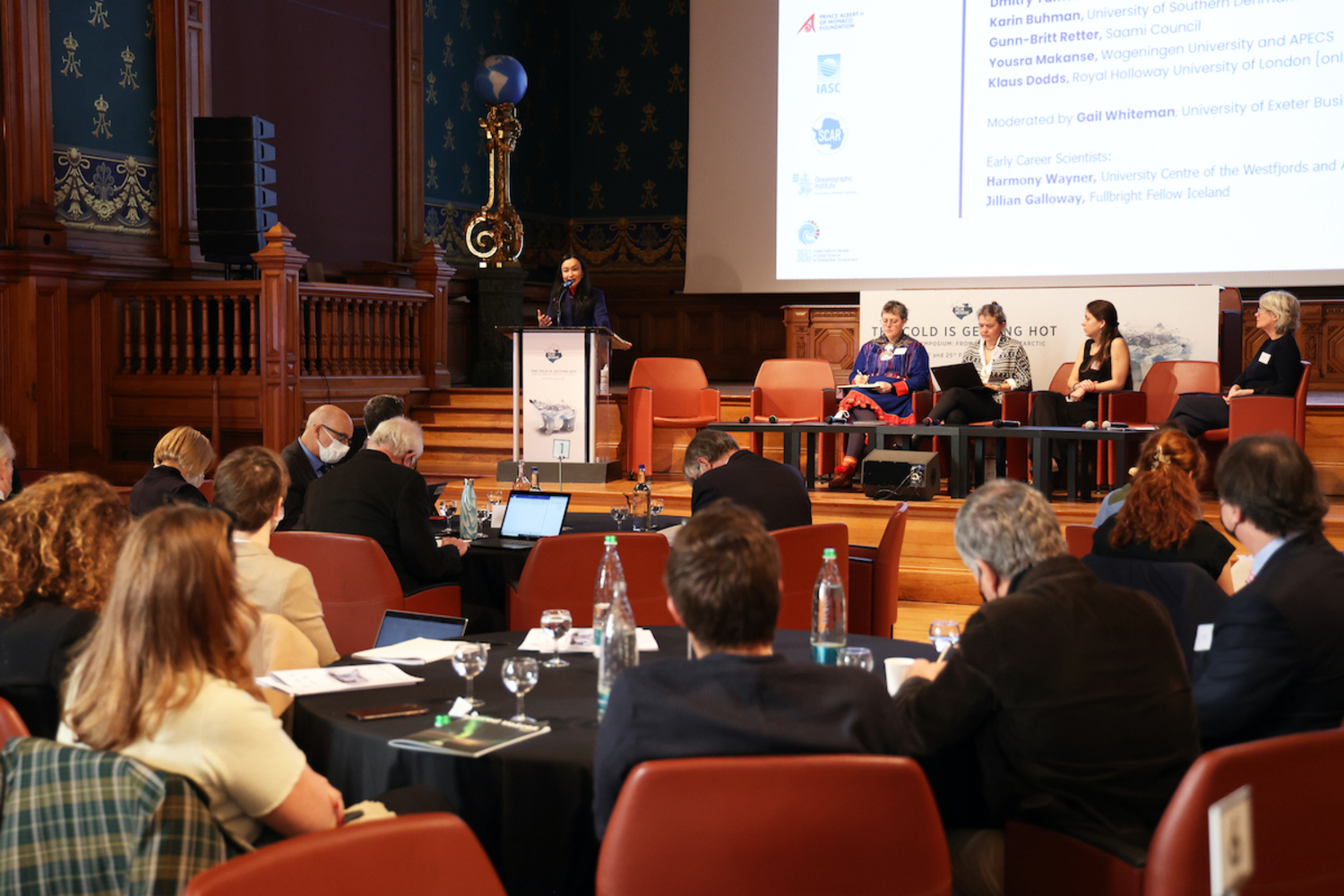 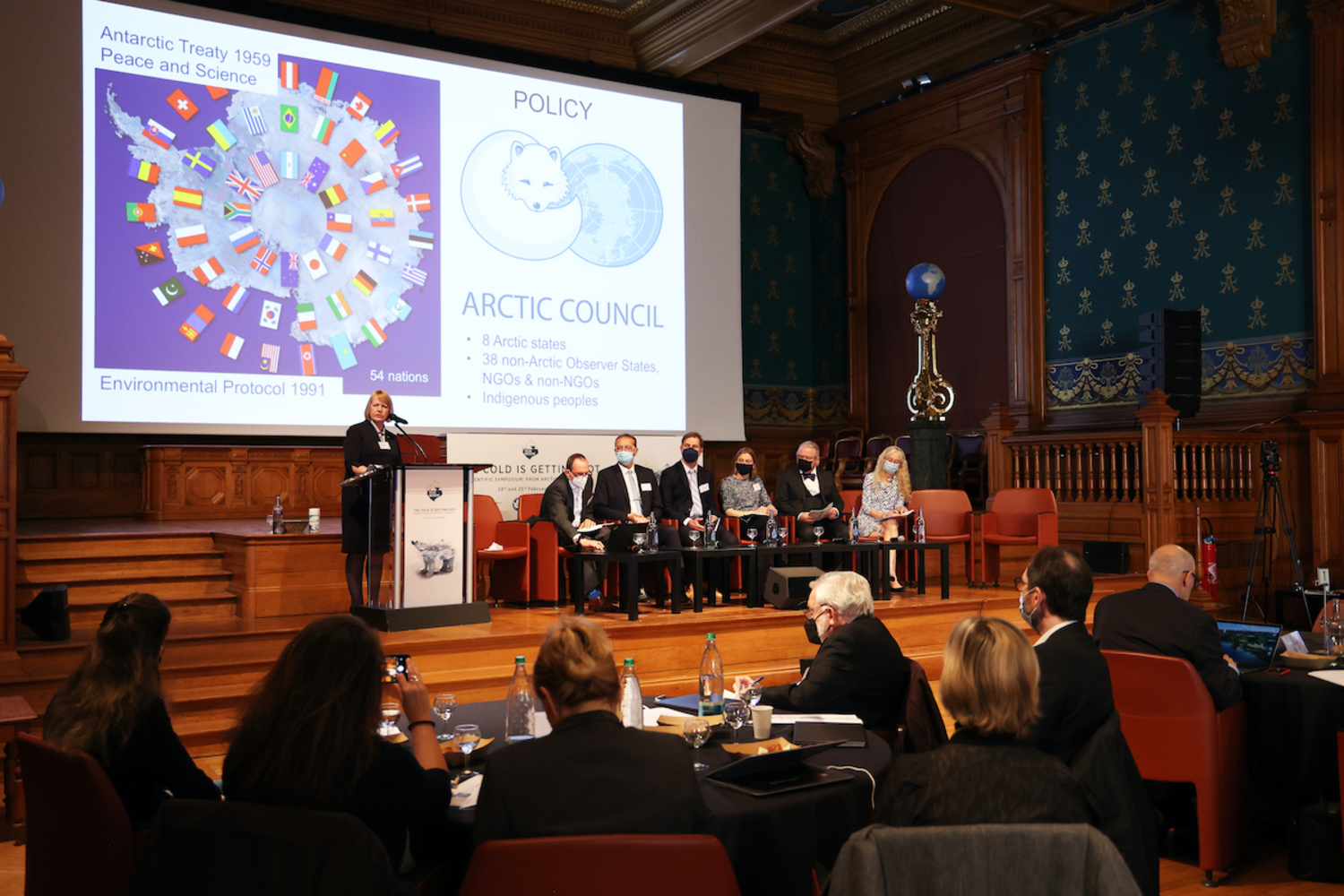 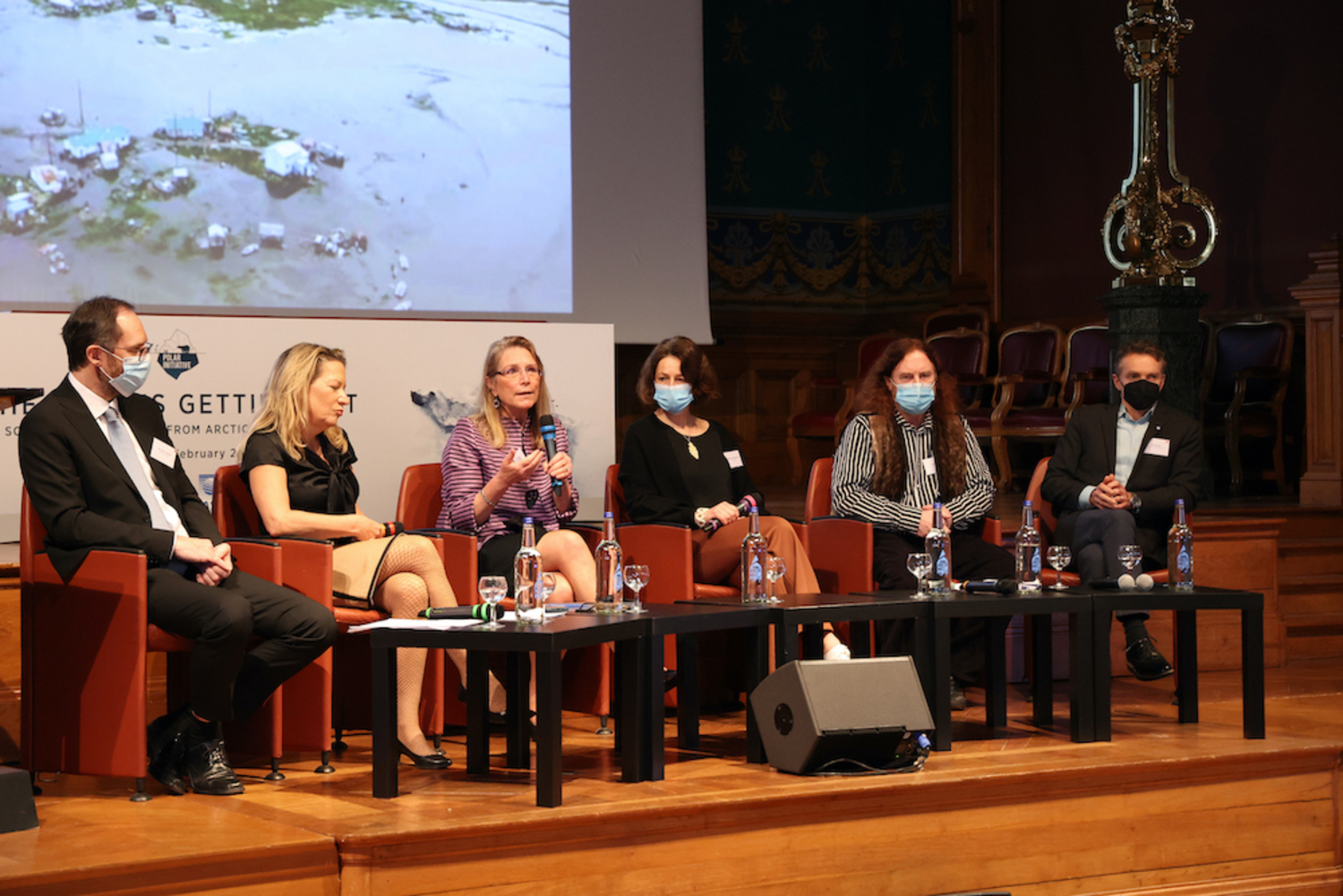