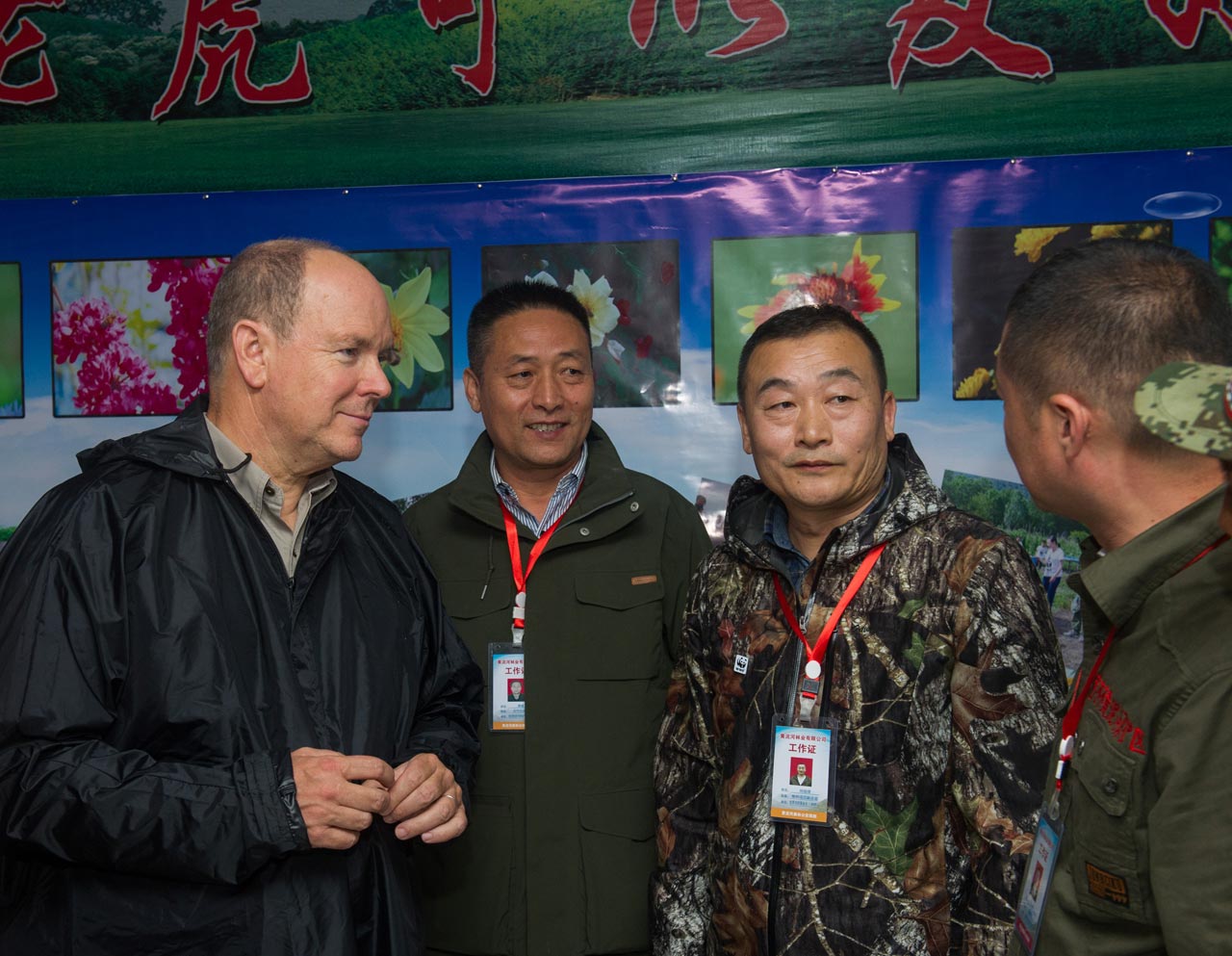 The first stage of HSH Prince Albert II of Monaco’s official visit to China from 5 to 8 September 2018 saw him travel to Jilin Province in the north-east of the country to have a tour of the Amur tiger conservation centre in the context of the ‘Welcoming tigers back home’ project led by WWF with support from his Foundation.

On his official trip to China, the Sovereign Prince stopped off first in Jilin province, north-east China, on Wednesday 5 September 5 to visit the Amur Tiger conservation centre run by WWF, whose initiatives to protect the species, supported by the Foundation since 2011, have included tripling the size of the tiger populations’ protected habitat and stepping up monitoring and anti-poaching control. Alongside His Excellency Mr Bernard Fautrier, Vice-President and CEO of the Prince Albert II of Monaco Foundation, the Sovereign Prince met Chinese authorities and local WWF stakeholders to discuss the conservation measures being carried out at the reserve.

Also known as the Siberian tiger, the Amur tiger is a symbol of vigour and power in Chinese culture. The destruction and degradation of forests combined with population growth have led to an unprecedented decline in the population of the species in north-east China.

In 2011, when barely more than 20 individuals remained – only one tenth of the population in the 1950s – the Prince Albert II of Monaco Foundation made the commitment, with WWF International, to take measures to protect the Amur tiger. Conservation initiatives have had lasting positive impacts throughout the tiger’s habitat. The 96,000-hectare expansion of the Protected Tiger Area has enabled the creation of two new areas in Heilongjiang province. The organisations’ ongoing partnership has been strengthened with phase II of the support project (2016–2019), whose aim is to help achieve the global goal of restoring Asian big cat populations and their habitat in the Amur Heilong Ecoregion by 2020.

Unfortunately torrential rain hit the region during the visit, preventing the Sovereign Prince and the Monegasque delegation from entering the forest alongside the rangers to visit the tiger monitoring and surveillance centre. Instead, they were given a presentation of the on-site monitoring activities. Traditionally it is extremely rare to observe the Amur tiger in its natural environment, but the cameras hidden in the protected area since 2012 are capturing more and more images of the tiger in areas where it had never been filmed before, confirming its population growth. Very encouraging data has been recorded: between 2000 and 2017, the 1,200 camera traps set across 12,000 square kilometres of the area have recorded 4,028 encounters with the Amur tiger, as well as 513 encounters with the Amur leopard over almost the same period. In 2017, 24 individual tigers and 27 leopards were recorded by camera traps in north-east China.

HSH Prince Albert II also visited the beekeeping cooperative set up as an Amur tiger anti-poaching measure to improve the living conditions for local communities. BeeKeeping Cooperate represents a valid economic alternative. The majority of the collective’s members are converted poachers who have found a new source of income through beekeeping.

Proving their success, the tiger protection systems put in place by WWF, with the support of the Prince Albert II of Monaco Foundation, are now integrated into China’s national and provincial Amur tiger protection plan. The project supported also aims to ensure the free movement of the tiger between China and Russia via a cross-border corridor.

After this environmental component of his official visit, HSH the Sovereign Prince headed to Beijing on 6 September to take part in economic and cultural engagements.