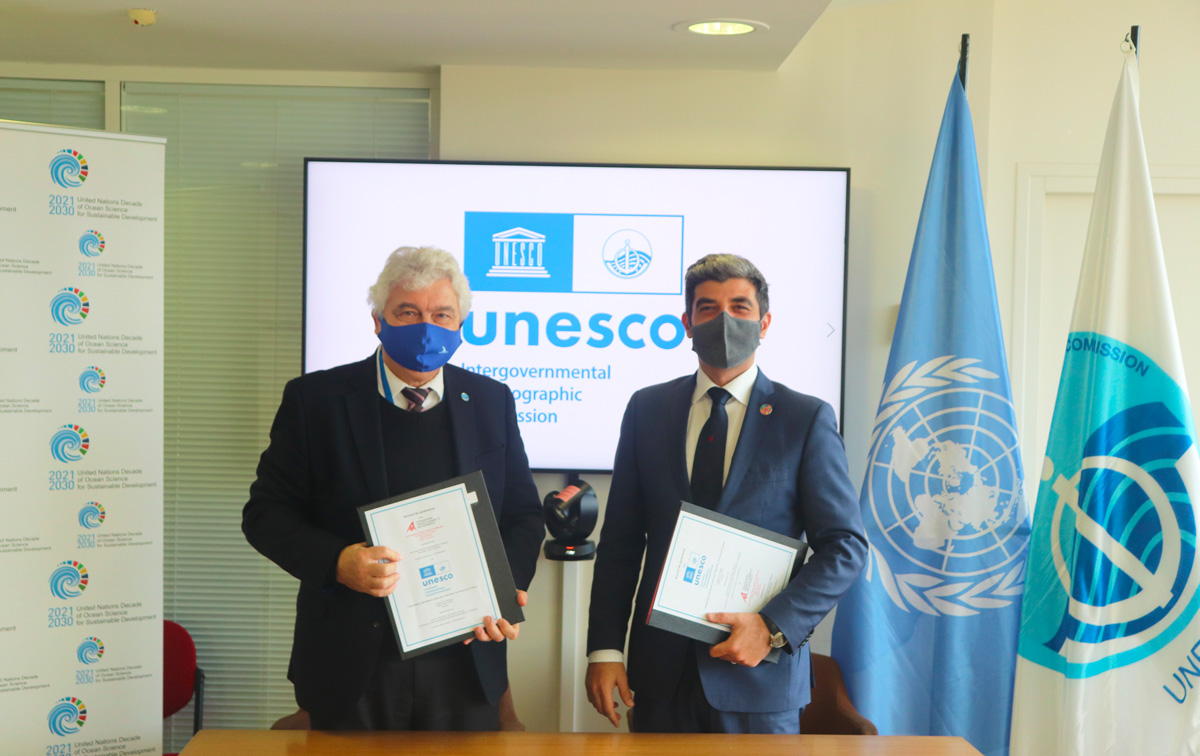 UNESCO’s Intergovernmental Oceanographic Commission (IOC) and the Prince Albert II of Monaco Foundation have formalized their partnership in the framework of the Decade of Ocean Science for Sustainable Development 2021-2030 (the ‘Ocean Decade’) through an agreement.

This agreement – signed on 17 November 2021 on the sidelines of the 41st session of UNESCO’s General Conference – solidifies the strategic contribution of the Prince Albert II of Monaco Foundation to the implementation of the Decade. It complements the Foundation’s role as a founding member of the Ocean Decade Alliance, a network of eminent partners whose mandate is to support resource mobilization and networking to accomplish the vision of the Decade.

“The power of the Decade lies in its participatory approach involving various stakeholders at different levels to facilitate the development of knowledge and partnerships. Through this cooperation with the Prince Albert II of Monaco Foundation, we are one step closer to achieving the vision of the Decade: ‘the science we need for the ocean we want’,” said Vladimir Ryabinin, Executive Secretary of IOC-UNESCO, which leads the coordination of the Ocean Decade.

Through this agreement, the two institutions have identified several avenues of collaboration for the next three years, including close collaboration around scientific and/or high-level events. These include a scientific symposium on the poles (Monaco, February 2022), a conference on coastal resilience (Monaco, March 2022), and the annual Monaco Ocean Week and Monaco Blue Initiative events organized by the Foundation to discuss current and future global challenges in ocean management and conservation.

Furthermore, IOC-UNESCO and the Prince Albert II of Monaco Foundation will work together in the framework of the Conferences of the Parties (COP) to the United Nations Conventions on Climate Change (UNFCCC) and on Biological Diversity (CBD).

In addition, the Foundation will host the third edition of the “Ocean Decade Foundations Dialogue” in Monaco in 2023. This annual gathering of philanthropic organizations from around the world aims to explore the best ways to generate partnerships and funding models for the Decade.

“Foundations, perhaps more agile and flexible, can more easily support innovation and solutions, both in terms of technology and approach. They can bring stakeholders together, facilitate dialogue and exchange as well as communication. These are the bases on which the Prince Albert II of Monaco Foundation proposes to contribute to the implementation of the Decade of Ocean Science. We are delighted to be partnering with IOC-UNESCO, which will help to draw the much-needed attention of the international community to the challenges facing the ocean,” stated Olivier Wenden, Vice-President and CEO of the Prince Albert II of Monaco Foundation.

The Foundation will also support communication activities, such as the development of digital and video products. A collaboration as part of the triennial State of the Decade report – a flagship publication that will document the impacts and progress made by 2030 – is also planned.

About the Ocean Decade:
The United Nations Decade of Ocean Science for Sustainable Development 2021-2030 (Ocean Decade) provides a convening framework for scientists, governments, academia, businesses, industry and civil society to develop the transformative solutions and partnerships needed to achieve a better understanding and protection of the ocean. These science-based advances will contribute to achieving the UN 2030 Agenda for Sustainable Development. The UN General Assembly mandated UNESCO’s Intergovernmental Oceanographic Commission (IOC) to coordinate the preparations and implementation of the Decade.

About the IOC of UNESCO:
The Intergovernmental Oceanographic Commission of UNESCO (IOC-UNESCO) promotes international cooperation in marine sciences to improve management of the ocean, coasts and marine resources. The IOC enables its 150 Member States to work together by coordinating programmes in capacity development, ocean observations and services, ocean science and tsunami warning. The work of the IOC contributes to the mission of UNESCO to promote the advancement of science and its applications to develop knowledge and capacity, key to economic and social progress, the basis of peace and sustainable development.