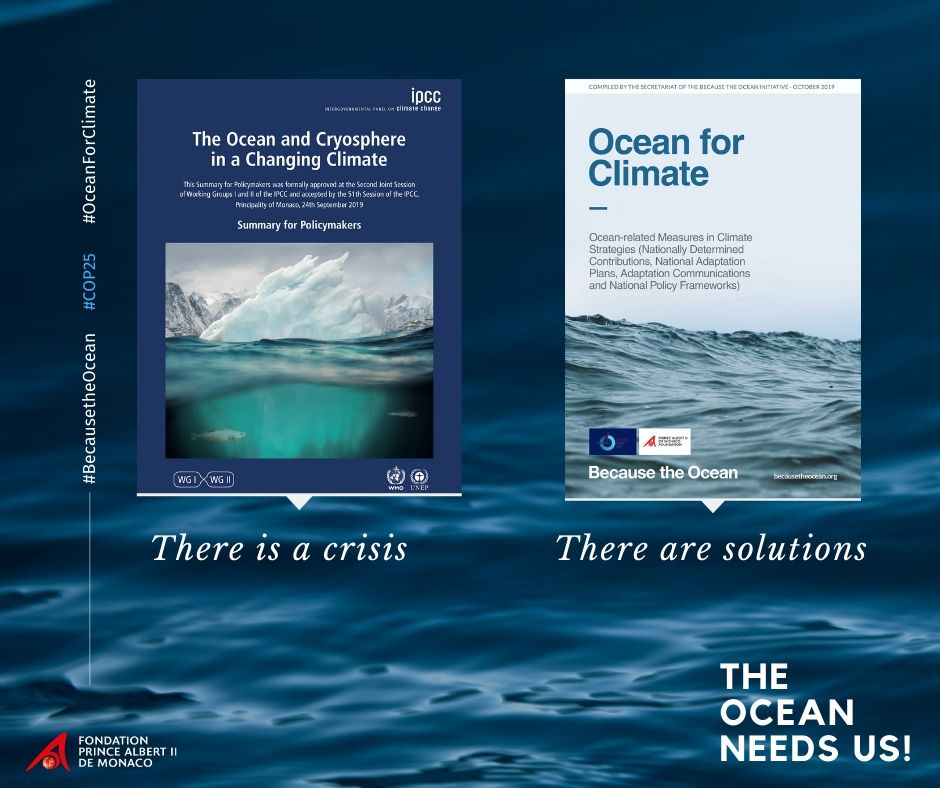 Ocean For Climate Report : Which solutions for the Ocean

The Because the Ocean (BTO) initiative has released a new report – with the support from the Prince Albert II of Monaco Foundation – offering actionable solutions to mitigate the impact of climate change and global warming on the Ocean and promote Ocean resilience.

Ocean for Climate: Ocean-Related Measures in Climate Strategies responds to the International Panel on Climate Change (IPCC) Special Report, which highlights the need for timely, ambitious and coordinated action to address the unprecedented damage inflicted on the Ocean by global warming and other human activities. With the Principality of Monaco, BTO, an initiative that brings together 39 countries committed to reinforcing Ocean resilience in the face of climate change, has been instrumental in supporting the creation of the IPCC Special Report and raising awareness of the inextricable link between climate change and the Ocean.

Because the Ocean is a state-led initiative. The proposed solutions are complementary to those put forward by civil society, in particular those of the Ocean and Climate Platform (POC), of which the Prince Albert II of Monaco Foundation is one of the founding members.

The solutions outlined in the report stem from a series of workshops organized by BTO that took place over three years, aimed at identifying best practices of Ocean-based climate action. The five key actions are (1) encouraging natural carbon sequestration by coastal ecosystems; (2) developing a range of sustainable ocean-based renewable energy solutions; (3) promoting adaptation and resilience solutions for vulnerable populations, marine ecosystems and ecosystem services threatened by climate change; (4) implementing hybrid solutions supporting both adaptation and mitigation in the fisheries and aquaculture sector; and (5)  “greening” the shipping sector.

“The Ocean has a major influence on climate change. It plays an essential role in climate regulation by absorbing more than 25% of CO2 emissions and more than 90% of the excess heat due to global warming. Therefore, there can be no action to fight climate change and limit its impacts without looking at the Ocean as a whole: its functioning in the climate system; the health of its ecosystems; its relationship to coastal communities; and all the economic activities that take place in and around it,” said HSH Prince Albert II of Monaco, a long-time supporter of BTO.

“Now that scientists have fully assessed the situation and the challenges we face, I remain resolutely committed to the fight against climate change and the protection of the Ocean.”

The report comes before HSH Prince Albert II of Monaco is set to attend the 25th Conference of the Parties to the UN Framework Convention on Climate Change (UNFCCC COP25) relocated in Madrid, Spain this December. At the urging of the Chilean Presidency, COP25 was placed under the “Blue COP” banner, focusing on the role of the Ocean in climate change mitigation, as well as the impact of climate change on the Ocean. The relocation of COP25 in Madrid (BTO’s headquarters and FPA2 spanish branch office) in partnership with Chile will undoubtedly reinforce the blue dimension. We anticipate COP25 President Carolina Schmidt, Environment Minister of Chile, and Teresa Ribera, Spain’s Minister for the Ecological Transition, to be powerful advocates and allies for action to increase ocean resiliency.

The report also aims to inspire greater attention to the role of the Ocean as governments prepare to update and enhance their Nationally Determined Contributions (NDCs) in 2020, in accordance with the 2015 Paris Agreement adopted by Parties to the United Nations Framework Convention on Climate Change (UNFCCC). Specifically, the report’s purpose is to provide incentives for including practical and effective ocean-based measures in climate strategies.