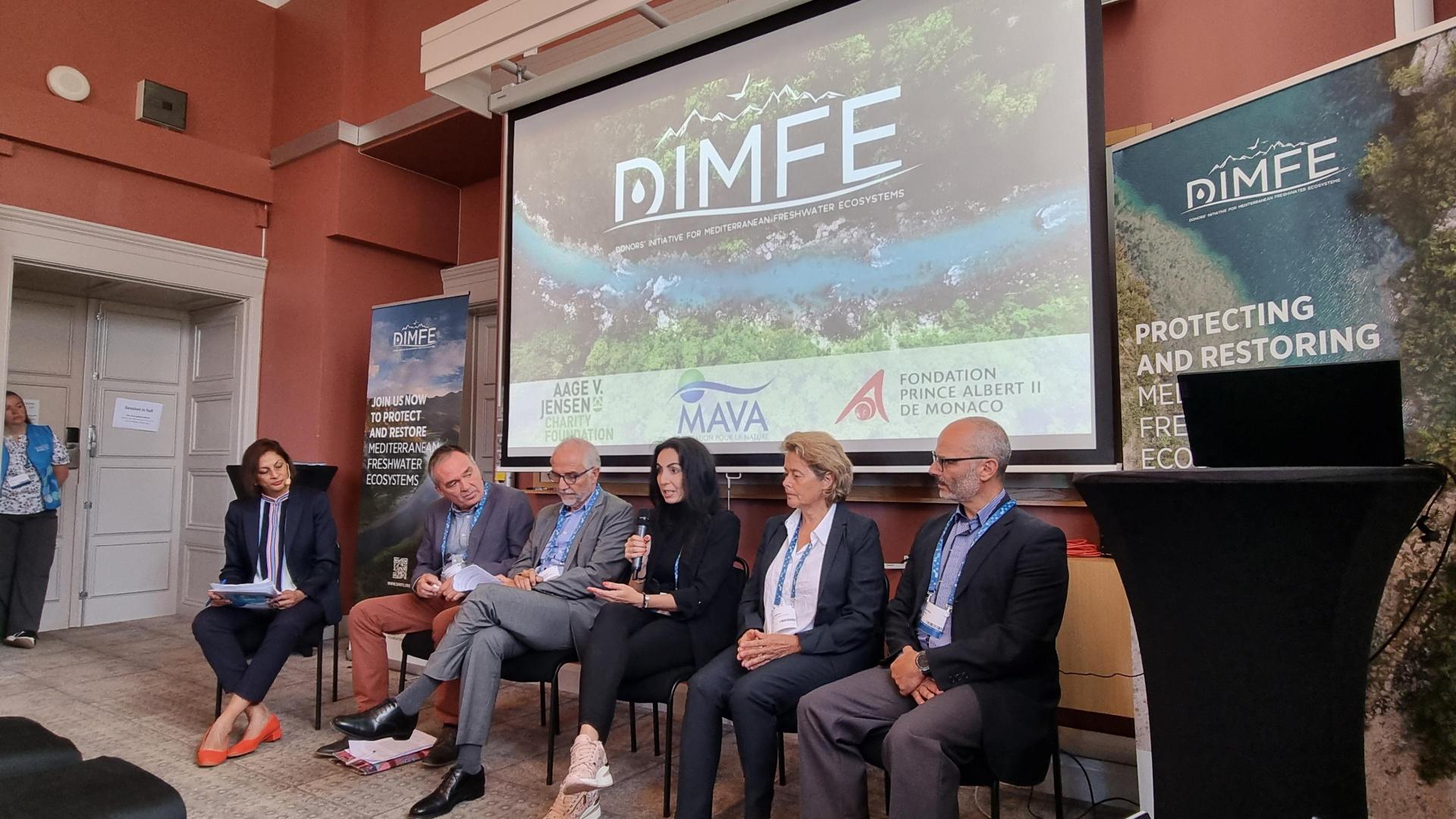 The Donors’ Initiative for Mediterranean Freshwater Ecosystems (DIMFE) organized a panel discussion on 31 August during Stockholm World Water Week, focused on solutions to protect and restore freshwater ecosystems in the Mediterranean basin.

While water resource management is extensively addressed, the link with healthy freshwater ecosystems is often overlooked. However, freshwater ecosystems play a key role in human development and well-being. They provide a wide range of essential ecosystem services, for example by providing drinking water and irrigation for crops, and are a nature-based solution to help tackle climate change through carbon sequestration and helping mitigate floods.

But these ecosystems are under severe pressure from pollution, urban development and climate change. In the Mediterranean basin, the situation is particularly critical. Almost half of the wetlands have disappeared since 1970. Since 1993, freshwater vertebrate populations have declined by an average of 28%. Out of the remaining species, 36% are considered endangered.

During the panel at the World Water Week in Stockholm, Léa Glâtre, Project Officer at the Foundation Prince Albert II of Monaco and coordinator of DIMFE, presented the actions of the initiative and why it is so important to protect freshwater ecosystems.

The panel then discussed concrete solutions implemented in three different sites in the Mediterranean, as well as the sharing of best practices, and what role alliances of donors can play in stepping up financial support to sustainably finance Mediterranean wetlands.

Myrsini Malakou, Managing Director of the Society for the protection of Prespa, explained how the longstanding efforts to protect the iconic Prespa lakes, shared by Greece, Albania, and Northern Macedonia, serve as an example for the region of the western Balkans thanks to the transboundary cooperation between different stakeholders and actors.

Manuel Mallia, Manager, Birdlife Malta, explained how his team will rehabilitate the Salina site in Malta, a site which used to be home to extraordinary biodiversity but which was completely destroyed in the 1970s. The project will also create an educational site to increase public awareness and support for wetlands protection in Malta.

Yousra Madani, Director of Living Planet Morocco, showcased an innovative funding mechanism for freshwater protection along the Sebou river in Morocco, working with a wide range of stakeholders including local actors, Government, and private companies.

Alain Meysonnier, President, Institut Méditerranéen de l’Eau, a network of Mediterranean stakeholders in water management, highlighted the lack of knowledge among water practitioners about wetlands and the ecosystem services they provide, offering to promote initiatives like DIMFE within the IME network to help close this gap.

Andi Götz, consultant and DIMFE Executive Committee Member, discussed some of the challenges related to the development of renewable energy such as hydropower and wind power, which can cause severe damage to ecosystems and biodiversity, and that campaigning can be an efficient and sometimes necessary tool to prevent damaging development.

Paule Gros, Head of Strategic Partnerships and Director Mediterranean Programme at the MAVA Foundation recalled that freshwater conservation is critically underfunded – a recent study showed that only 2% of all financial support from European philanthropy is going towards freshwater ecosystems.

Mette Skov, Chairman of the Aage V Jensen Charity Foundation, and Lina Hansson, Coordinator of Initiatives with the Prince Albert II of Monaco Foundation stressed the need for increased funding and collaboration as well as innovative new partnerships to address these challenges, to scale up success stories, and to increase impact. They closed the panel discussion by inviting fellow donors to support DIMFE, and by launching DIMFE’s second call for projects, available here.

About DIMFE: The Donors’ Initiative for Mediterranean Freshwater Ecosystems (DIMFE) was launched in 2021 by the Prince Albert II of Monaco Foundation, the MAVA Foundation and the Aage V. Jensen Charity Foundation, which aims to protect, conserve, and restore freshwater ecosystems in the Mediterranean basin. 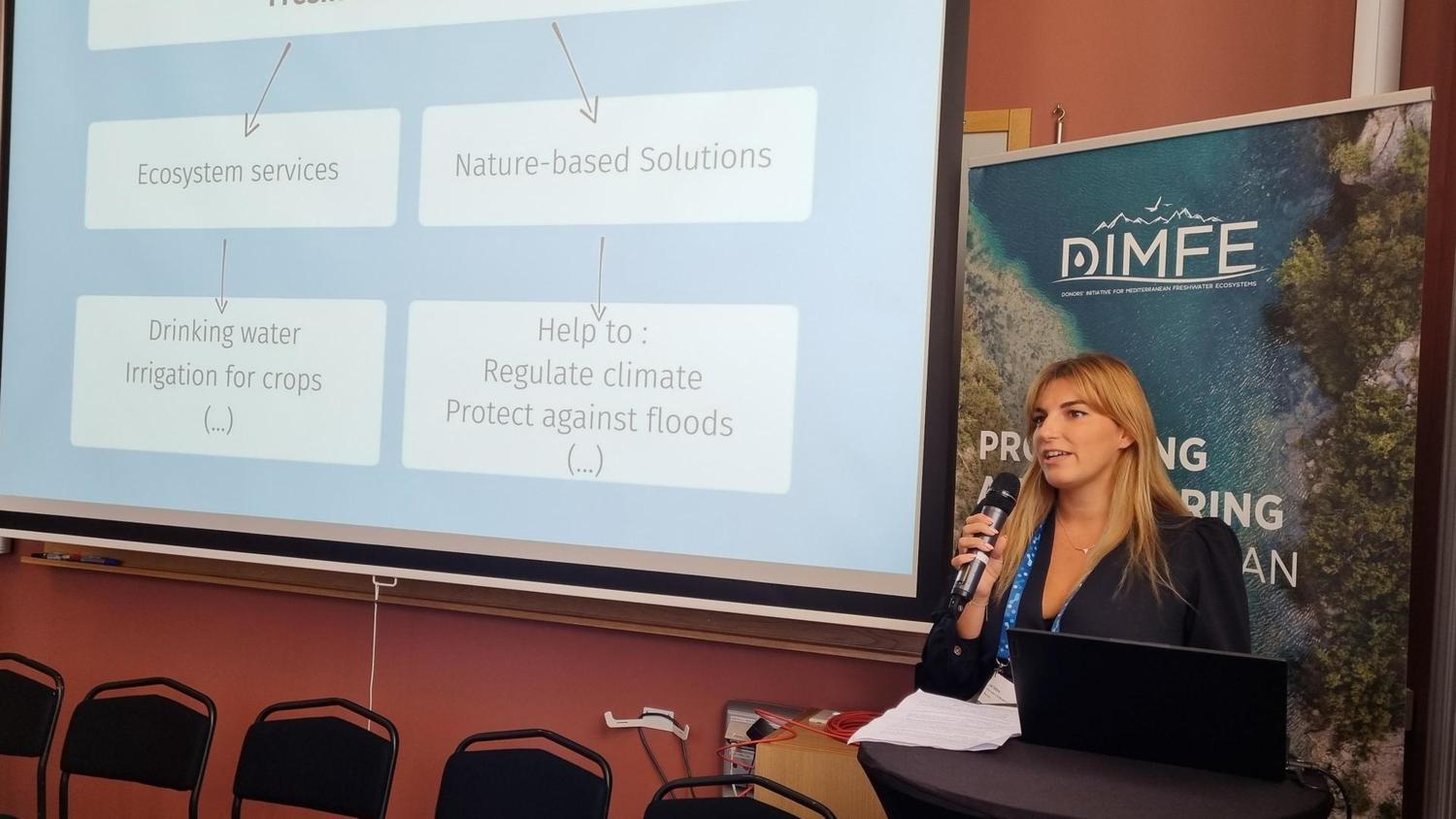 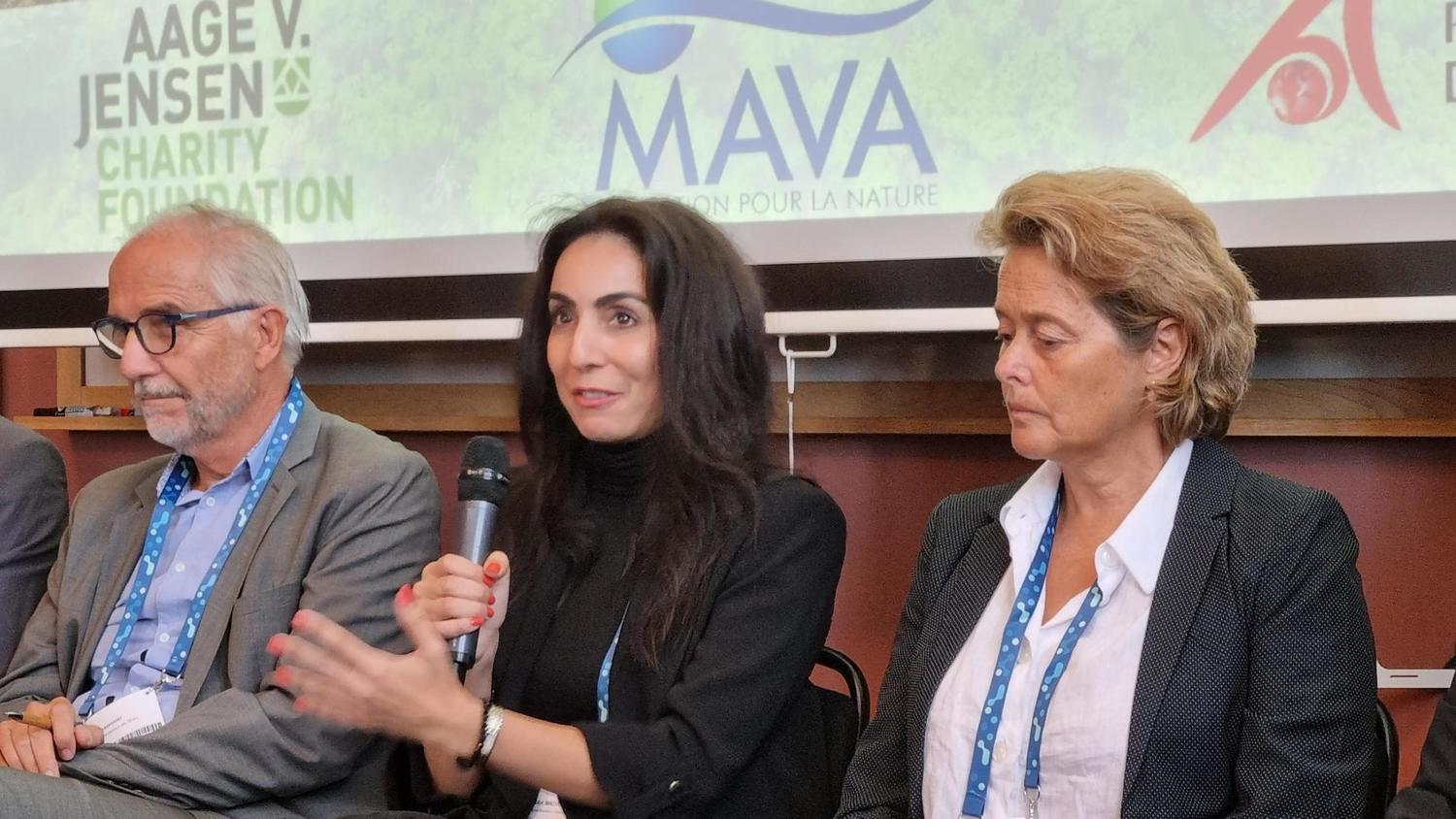 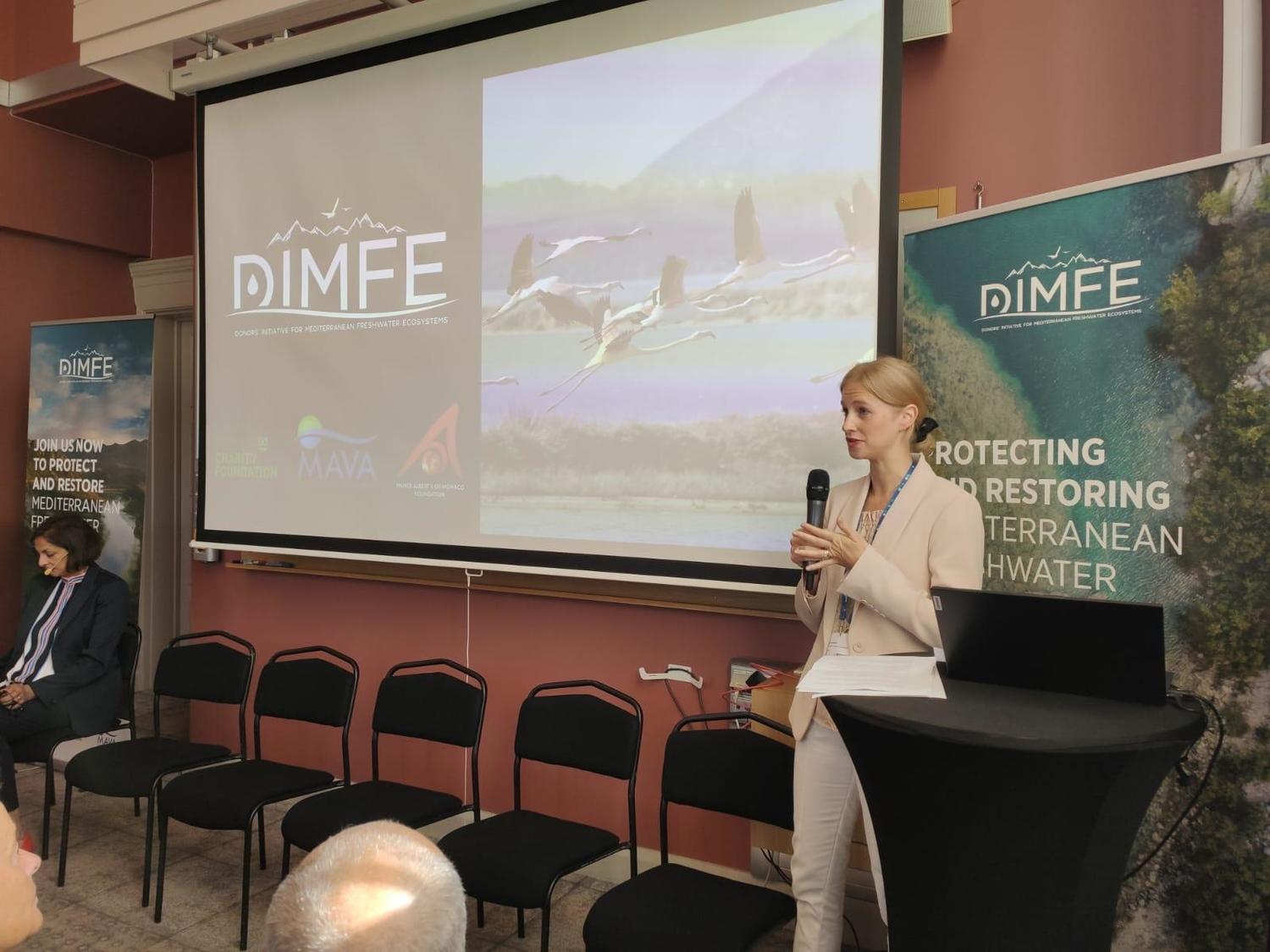 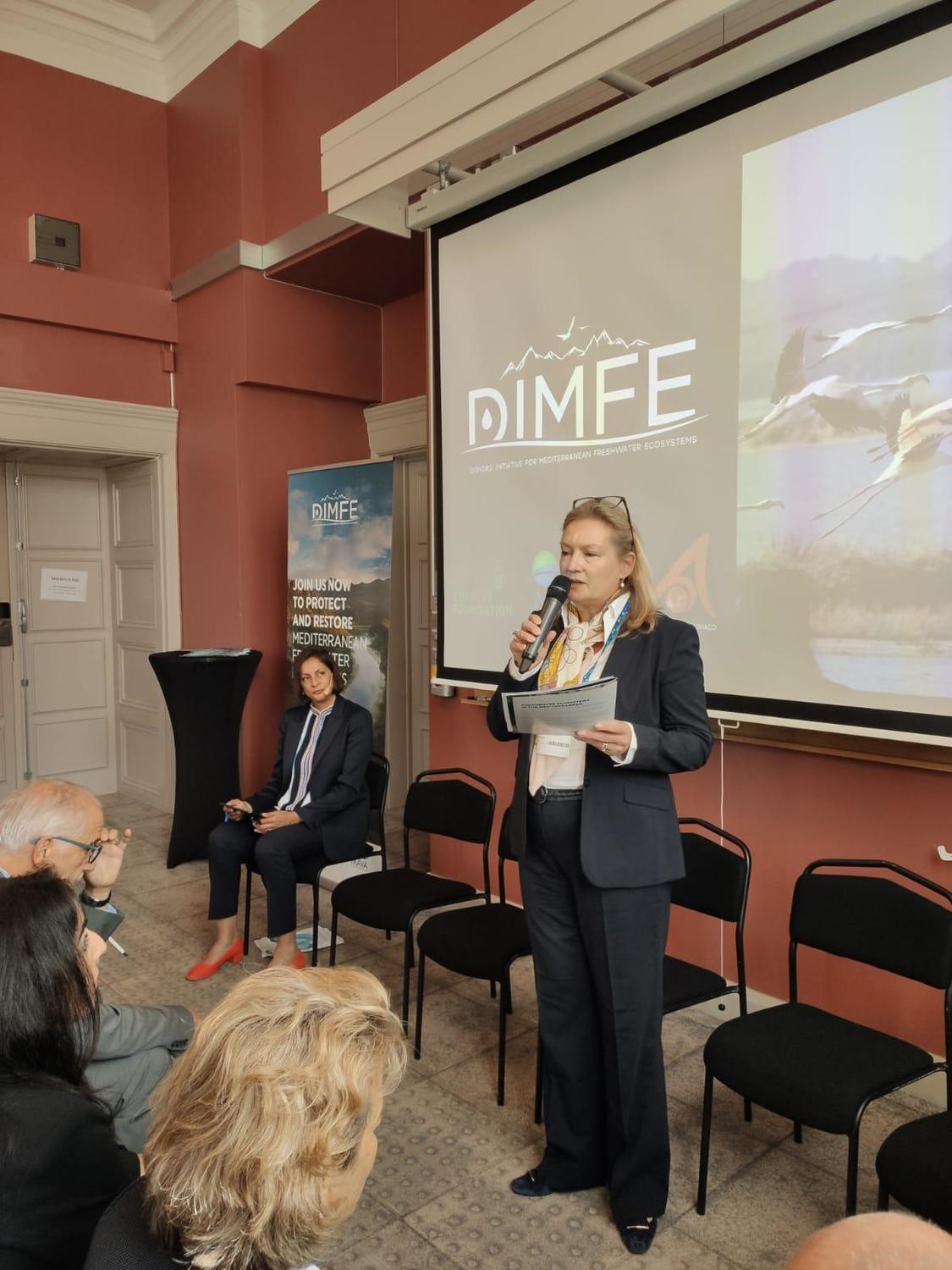