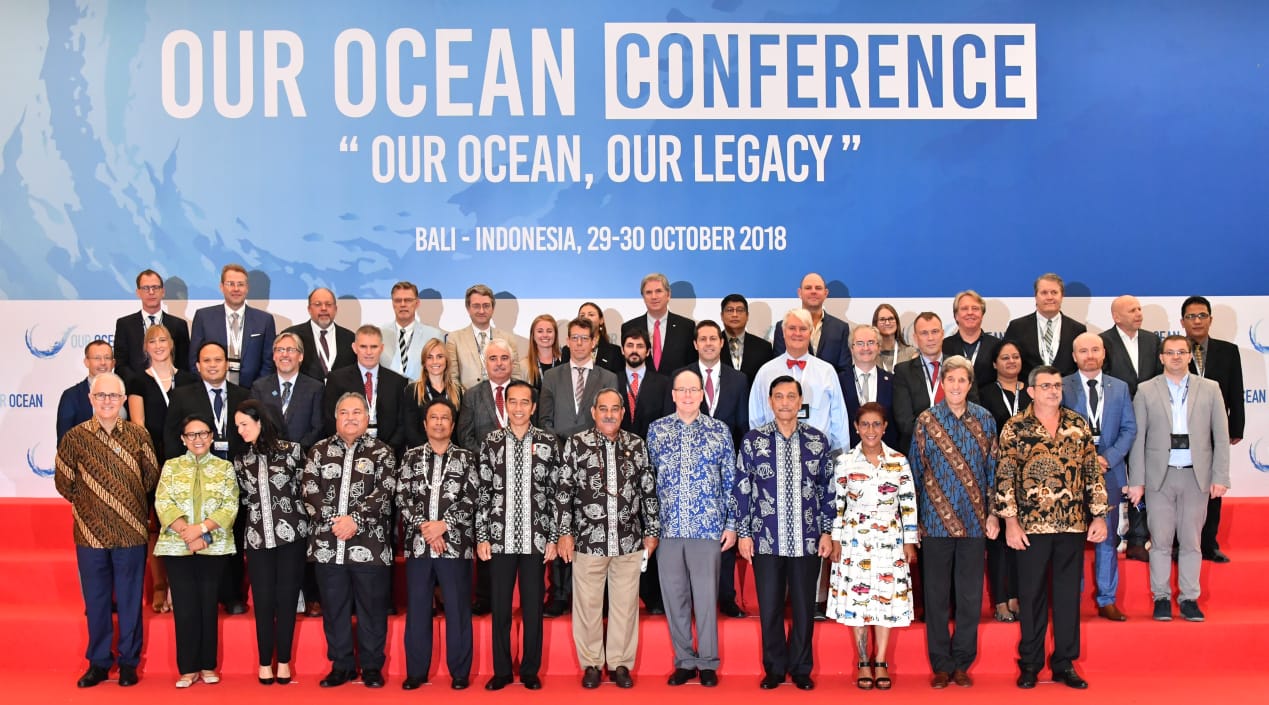 Preserving the ocean to protect our planet: Monaco shows its commitment at the fifth international Our Ocean Conference Bali, Indonesia

HSH the Sovereign Prince participated in the fifth Our Ocean Conference on 29 and 30 October in Bali accompanied by a Monegasque delegation consisting of HE Bernard Fautrier, Vice-President and CEO of the Prince Albert II of Monaco Foundation, Robert Calcagno, CEO of the Oceanographic Institute, Francis Staub, Secretary of the International Coral Reef Initiative (ICRI) for Monaco, Wilfrid Deri, Project Officer at the Monaco Ministry of Foreign Affairs and Cooperation, and Auriane Pertuisot, Marine Project Manager at the Prince Albert II of Monaco Foundation.

International leaders, corporations, scientists, NGOs and civil society representatives united around the theme Our Ocean, Our Legacy by committing to take action towards a more effectively managed and protected ocean. Tackling climate change, fighting plastic pollution, developing Marine Protected Areas and preserving coral reefs are key issues for the Principality of Monaco, which is actively involved in protecting the ocean.

At the opening of the plenary session on climate change, HSH the Sovereign Prince evoked the importance of the conference, which was launched in 2014 by John Kerry: namely, helping to build the foundations of a new relationship between humans and the sea by facilitating a productive dialogue between decision-makers from different sectors and enabling concrete solutions to emerge. The past year, which has been marked by many devastating weather events, has served to remind us of the urgency to act and how preserving the ocean is key in the fight against climate change.

CONCRETE COMMITMENTS FOR A SUSTAINABLE OCEAN

Tackling plastic waste is in the political and media spotlight like no marine subject ever has been before. Visible macro-plastic waste, which has led ocean experts to warn of “plastic continents”, is just the tip of the iceberg. No sea or region, even the most isolated, is untouched by this pollution, which spreads via currents, and a large part of which is too small (micro-plastics) or too deep (litter has been found at the bottom of ocean tranches) to be seen.

At the plenary session on marine pollution, alongside its partners Surfrider Europe Foundation, the Tara Expeditions Foundation, the MAVA Foundation and the IUCN, the Prince Albert II of Monaco Foundation announced its intention to invest 500,000 euros in 2019 in developing the Beyond Plastic Med – BeMed initiative, which supports concrete projects aimed at reducing plastic pollution in the Mediterranean. Since it was established in 2015, BeMed has supported 23 projects in 11 countries around the Mediterranean. Its 2018 call for micro-initiatives is running until 5 January 2019.

In Bali, the European Commissioner for the Environment, Karmenu Vella, announced the creation of a global aquarium coalition to fight plastic pollution. In 2017, Monaco’s Oceanographic Museum was one of the first aquariums to join the campaign. Since then the European Commission and UN Environment have helped grow the movement by joining, with more than 160 aquariums now committed to raising visitor awareness. The Oceanographic Museum is pursuing its task of mobilising and coordinating the network.

In addition to single-use plastic, our resource- and energy-intensive and waste-generating production methods need to be redesigned. Dame Ellen MacArthur, one of the leading advocates of the circular economy, has unveiled the New Plastic Economy Global Commitment, an initiative launched by her foundation. Sharing the vision of a circular economy, the Prince Albert II of Monaco Foundation and the Oceanographic Institute have joined the initiative. On 12 October 2018, Dame Ellen MacArthur was awarded the Oceanographic Institute’s Albert I Great Medal in recognition of her work to transform the plastics economy.

During the plenary on climate change the Prince Albert II of Monaco Foundation announced the financial support it is investing in marine conservation initiatives as well as in studies and research aimed at improving the sustainable management of the ocean: the Foundation has invested 4.5 million euros in 2018 and has already raised 3.5 million euros for 2019.

As emphasised by the recent Intergovernmental Panel on Climate Change report, the preservation of coral reefs requires urgent action if we are to prevent their extinction by the middle of this century.

The International Coral Reef Initiative (ICRI), which Monaco is co-chairing with Australia and Indonesia until 2020, organised a high-level event on The Future of Coral Reefs in a Sustainable Blue Economy, with HSH the Sovereign Prince, HE Tommy E Remengesau Jr, President of the Republic of Palau, Erik Solheim, Executive Director of UN Environment, and the Monegasque delegation as participants.

HE Bernard Fautrier, Co-Chair of ICRI for Monaco, recalled the Principality’s historic commitment to protecting the seas, lending constant support to research, especially through the work of the Monaco Scientific Centre, as well as through the various projects supported by the Foundation. Monaco’s ambition during the term of its co-chairmanship is in keeping with this tradition and is based on two key points: encouraging new countries to become members of the ICRI and adopting a realistic, effective and inspiring plan of action.

During his closing speech at the side event, HSH the Sovereign Prince invited the countries that hadn’t already done so to make a commitment by signing the Coral Reef Life Declaration, which he launched alongside HRH the Prince of Wales at Our Ocean 2017 in Malta. As a result, New Caledonia, represented by the President of the Government, Philippe Germain, along with the Republic of Vanuatu joined the declaration’s list of signatories.

HSH Prince Albert II of Monaco then commended his Foundation and Vulcan Inc for each committing to invest 250,000 US dollars in a Global Fund for Coral Reefs focusing on coral reef conservation, restoration and adaptation to climate change.

Throughout the conference Prince Albert II and the Monaco delegation offered their support for the establishment of effective and well-managed Marine Protected Areas (MPAs) around the world, in particular during discussions with Donna Bertarelli about the Pew Bertarelli Global Ocean Legacy, an initiative to create very large MPAs with a high level of protection.

HSH Prince Albert II expressed his support to the President of New Caledonia, Philippe Germain, for the ambitious protection plan for the Natural Park of the Coral Sea. This immense MPA covers 1.3 million square kilometres, including one third of the world’s most effectively protected coral reefs. At the conference Philippe Germain pledged to place an additional 200,000 to 400,000 square kilometres of the park under special protection by 2019. 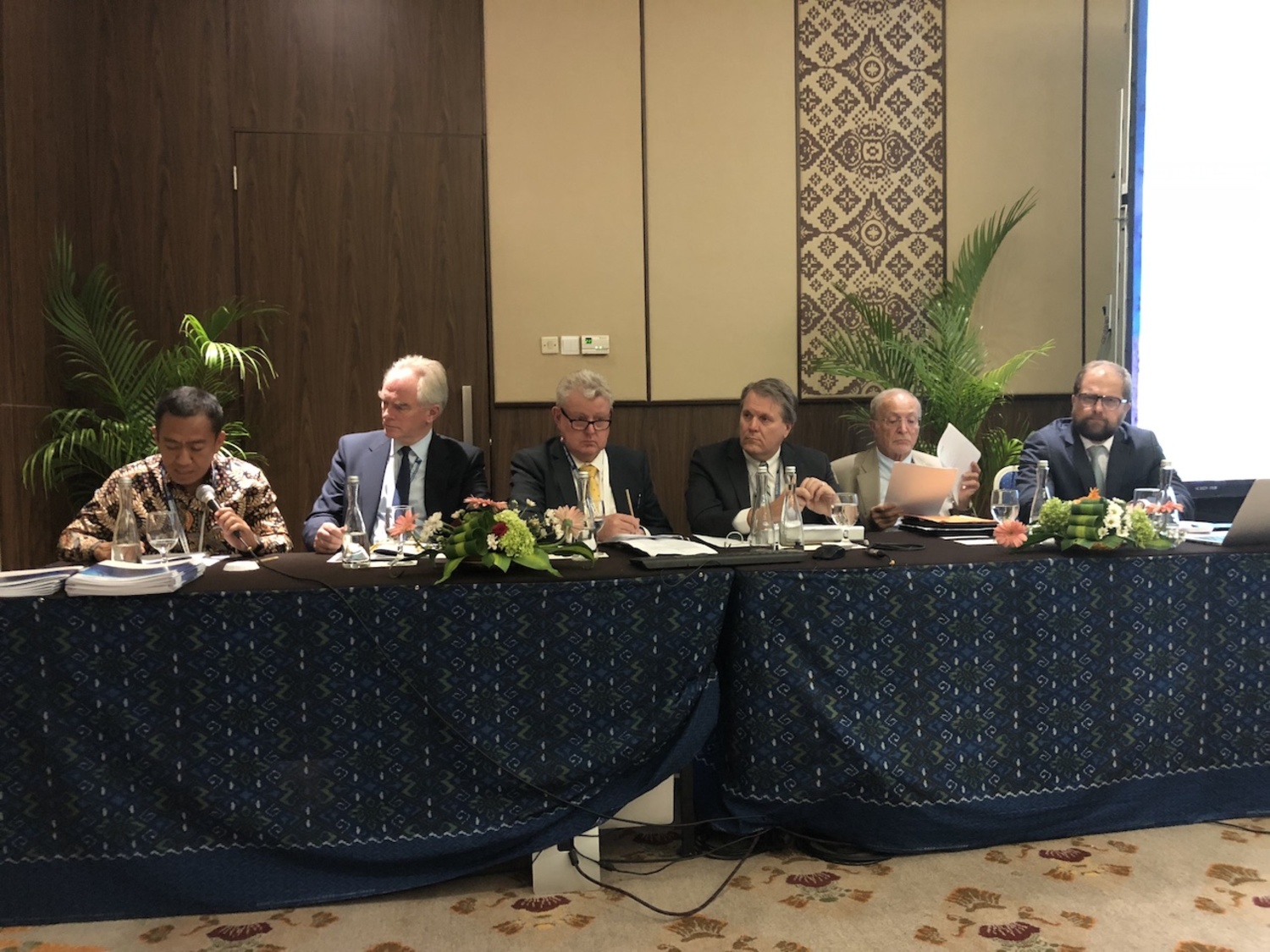