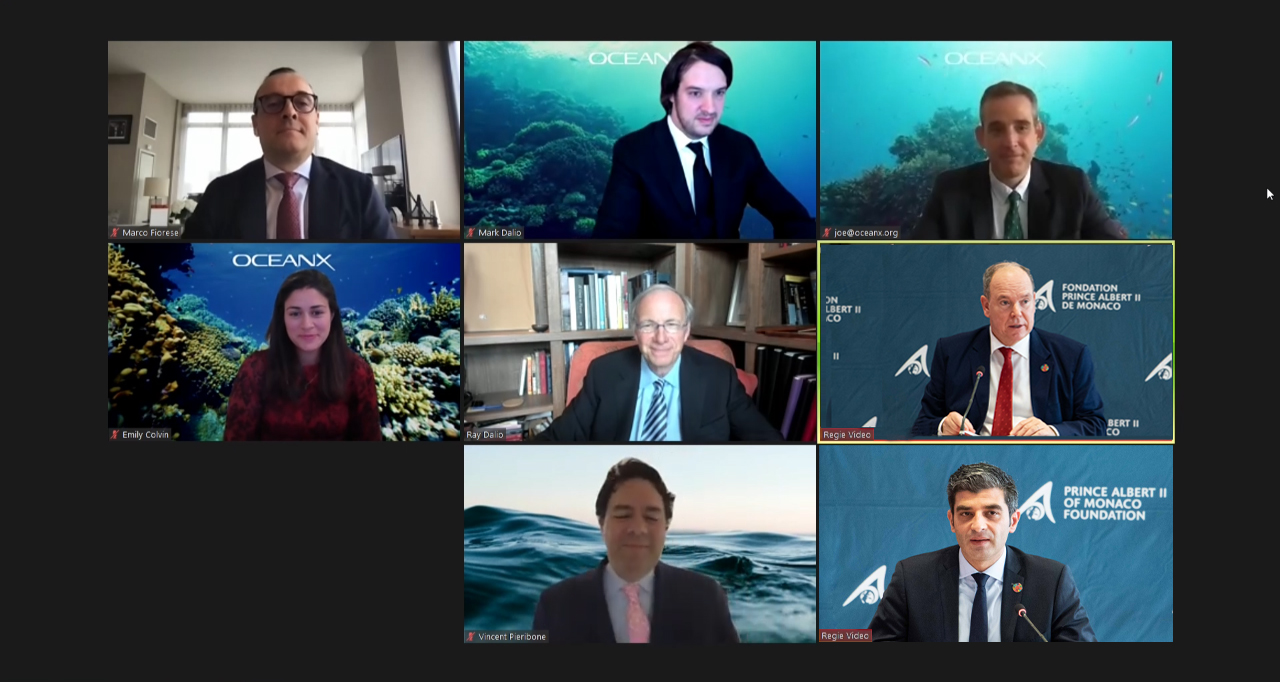 On December 4th, in the presence of HSH Prince Albert II of Monaco, an agreement was virtually signed between His Foundation and nonprofit ocean exploration initiative OceanX. Olivier Wenden, Vice-President and CEO of the Prince Albert II of Monaco Foundation, Ray Dalio and his son Mark Dalio, co-founders of OceanX, sealed the new partnership with the aim to develop marine conservation activities and support joint projects.

Ocean preservation is at the core of the missions undertaken by the Prince Albert II of Monaco Foundation since its inception in 2006, from coral reef conservation to the development of Marine Protected Areas, the fight against plastic pollution and the protection of endangered species. Increasing awareness, education and knowledge on marine biodiversity are among the shared interests of the Foundation and OceanX, which is committed to exploring the ocean and bringing it back to the world through compelling media, with a goal of creating a global community engaged with understanding, enjoying and protecting our oceans.

Thanks to OceanX’s innovative scientific research, media production and exploration vessel, OceanXplorer,  scientific missions will be conducted to discover the still unknown parts of the ocean. The data collected from the surface to the seafloor will be of precious value for scientists to better understand and protect the ocean and its ecosystems threatened by human activities. The digital content that will be produced will be another important aspect of the partnership in the shared objective to raise awareness.

“The Prince Albert II of Monaco Foundation is really proud to partner with the Dalio family whose passion and talent for showcasing the treasures of the sea is a real added value to inspire people and raise awareness. We believe that we naturaly protect what we know and love: positive feeling being far more impactful to open minds and change habits. The collaboration with OceanX meets another mission of the Foundation which is to support the scientific community by collecting and giving access to relevant data. We are particularly happy to contribute to this essential dimension of marine preservation that is the key to implement efficient actions in return,” declared Olivier Wenden.

“We are on a mission to advance global understanding of and passion for the ocean. We do this through exploration and by making compelling media so that hundreds of millions of people will see the ocean and be thrilled by it. This work requires great partners who share our excitement for and commitment to the ocean, and we are excited to be working with the Prince Albert II of Monaco Foundation given both the principality’s century-long legacy in ocean exploration and its current global leadership in raising awareness of the need for ocean conservation,” said Ray Dalio.

The partnership announcement between the two groups comes on the heels of OceanX’s most recent research expedition to study global-warming resistant super corals in the Red Sea. To view footage from the mission, which was broadcast at the G20 Summit 2020, visit bit.ly/red-sea-corals

OceanX
OceanX is a mission to support scientists to explore the ocean and to bring it back to the world through captivating media. Uniting leading media, science, and philanthropy partners, OceanX utilizes next-gen technology, fearless science, compelling storytelling, and immersive experiences to educate, inspire, and connect the world with the ocean and build a global community deeply engaged with understanding, enjoying, and protecting our oceans. OceanX is an initiative of Dalio Philanthropies, which furthers the diverse philanthropic interests of Dalio family members. For more information, visit www.oceanx.org and follow OceanX on Facebook, Instagram, Twitter and LinkedIn.