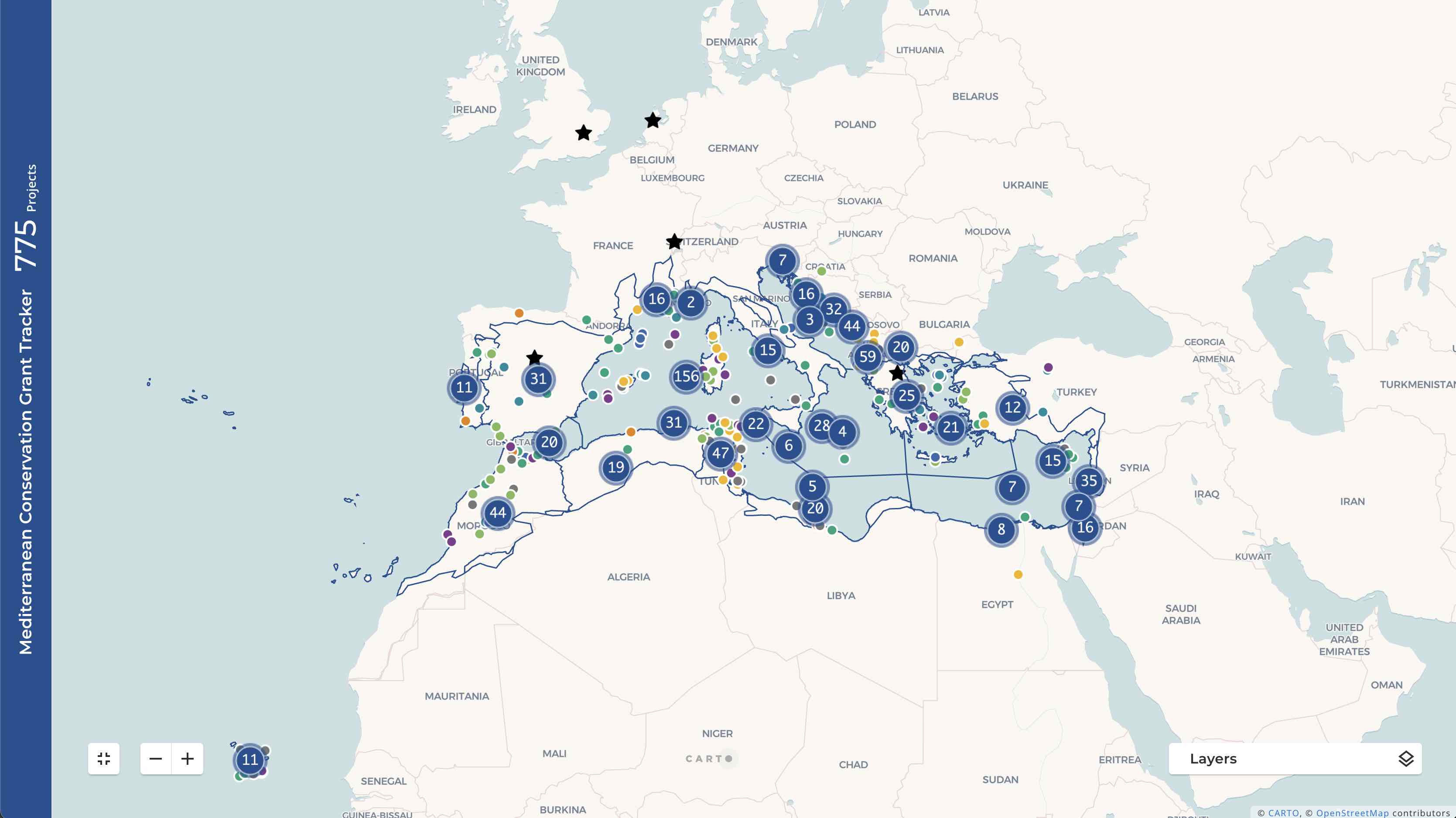 Tracking biodiversity conservation efforts in the Mediterranean just got easier! Nine donor organizations supporting conservation work in the region join forces to include their grants in a new mapping tool: the “Med Conservation Grant Tracker”.

The Mediterranean basin is home to remarkable biodiversity, both in its marine, freshwater and terrestrial realms. The Mediterranean Sea boasts more than 17 000 species, including 7,5% of the fauna and 18% of the marine flora of species known to date, many of them endemic to the region. But this biodiversity hotspot is under pressure from urbanization, pollution, climate change, and overexploitation. Today, 21% of the species in the Mediterranean Sea are considered vulnerable and 11% classified as endangered on the IUCN Red list. More than 75% of fish stocks are overexploited. Freshwater vertebrate populations have declined by an average of 28% since 1993, and one species in three are now endangered. Investing in the protection and restoration of Mediterranean ecosystems and biodiversity is more important than ever to reverse these trends.

To get a better idea about past and ongoing conservation action in the Mediterranean and the funding landscape in the region, nine donor organizations have come together to launch the “Med Conservation Grant Tracker”: med-grant-tracker.org. Users can browse more than 700 grants awarded by this group of donors since 2015, awarded to some 520 implementing organizations, for a total of more than 200 M€.

The majority of projects funded address species conservation and marine coastal conservation (246 and 183 projects respectively) with less projects to date taking a blue economy approach or including a conservation finance element (78 and 7 projects respectively. Regarding regional distribution of grants, more than one fifth of all marine projects take place in the Western Mediterranean region, whereas most land-based projects are based in Albania, Tunisia and Morocco (around 6% of all projects, respectively for each country). The most common grant size is between 50,000 € to 100,000 €.

The mapping initiative was launched by the Med Donors’ Roundtable, an informal group of donors supporting nature conservation and restoration in the Mediterranean. The group includes the MAVA Foundation, the Prince Albert II of Monaco Foundation, the Adessium Foundation, the Critical Ecosystem Partnership Fund, the French Facility for Global Environment, Fundacion Biodiversidad, Oceans5, the Sigrid Rausing Trust, and the Thalassa Foundation.

The objective of the tool is to shed light on the importance of funding nature conservation in the region, to avoid duplication of efforts, and instead foster collaboration and complementary action among donors. The Med Donors Roundtable invite fellow donors in the Mediterranean to join the mapping exercise:

Karlijn Steinbusch, Adessium Foundation: “With this tool, we want to showcase some of the conservation action funded in the Mediterranean basin in the last years, encourage our fellow donors to join us and add their grants, and importantly, to inspire new donors to invest in Mediterranean nature conservation.“

Paule Gros, MAVA Foundation: “With the closing of the MAVA Foundation by the end of the year, the largest philanthropic funder in the region to date, there will be a gap to fill. We need all hands on deck to rise up to the challenge of protecting Mediterranean biodiversity.”

Pierre Carret, Critical Ecosystem Partnership Fund: “The Mediterranean region has sometimes been considered as a difficult region for nature conservation. We hope that this tool will help persuade other donors that it is possible to do good conservation work in the Mediterranean”.

Philippe Mondielli, Prince Albert II of Monaco Foundation: “We are delighted to partner with fellow donors on this effort to build on the legacy of past investment in the Mediterranean and to launch new collaborations in this iconic biodiversity hotspot, which we all need to urgently protect.”

The Med Conservation Grant Tracker is still very much “work in progress”, and the Med Donors’ Roundtable welcomes any feedback that can improve the tool.